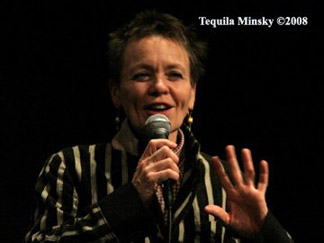 Every other year, archivists from around the country gather to present unusual films of unknown origins dubbed “orphans.” They span the gamut of filmmaking from local newsreels to home movies to propaganda to esoterica. Two years ago, STF presented a night of orphans with Alan Berliner as a guest. Audiences were treated to rare clips they’ll never forget and probably never have the chance to see again. Now Streible returns to STF with a new rich sampling. Maybe you remember the New Yorker article last summer (reprinted below) about the surprise discovery of the home movie wedding of boxer Jose Torres and you thought: “I wish I could see that!” That’s the kind of thing we’re talking about. Filmmaker Jeanne Liotta who found that footage in the garbage will present it here. Dan will show a 1979 Soviet propaganda film TEENAGE COSMONAUTS. Performance artist Laurie Anderson (pictured) presents footage taken from the MIR space station at the time when the USSR was coming apart.

ADDITIONS TO THE LINE-UP: rare 1941 footage of the African-American community in Kannapolis, North Carolina shot by H. Lee Waters; a 1963 United States Information Agency propaganda film shot by Academy Award-winner James Blue in Colombia to promote John F. Kennedy’s “Alliance for Progress” in Latin America; KIDNAPPER’S FOIL a 1936 amateur imitation of OUR GANG shot by itinerant filmmaker Melton Barker in Childress, Texas ; and an animated film by Helen Hill who was working on a project to restore films damaged by Hurricane Katrina before she was murdered in New Orleans last year.

Listen to the MP3 of Dan Streible interviewed about Orphan Films at STF on the Leonard Lopate Show.