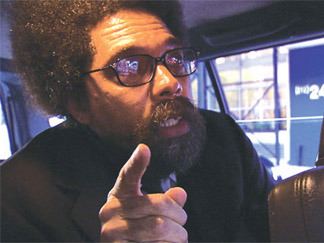 A MONDAY NIGHT SPECIAL SCREENING FOR STF PASS HOLDERS ONLY

A consistently invigorating exploration of the driving forces behind contemporary philosophy, Astra Taylor’s Examined Life speaks to philosophers about their work and how it relates to modern existence. (The title, of course, invokes Socrates’s statement that the unexamined life is not worth living.) Taylor, whose ~~i~~ek! played the Festival in 2005, has compiled a virtual who’s who of contemporary thought. Her guest list includes Cornel West, Avital Ronell, Peter Singer, Kwame Anthony Appiah, Martha Nussbaum, Michael Hardt, Slavoj ~~i~~ek, Judith Butler and Sunaura Taylor. Each is given ten minutes of screen time to enlighten us.

Eschewing the tired talking-heads technique, Taylor drops these thinkers in the midst of modern, urban settings that reflect or offer a counterpoint to their meditations. One of her principal objectives was to take philosophy out of the classroom and into the street, as per Nietzsche’s edict that the only ideas of any real value are those born during walks.

Singer, best known for his work Animal Liberation, discusses our addiction to consumption while walking along Fifth Avenue. Strolling leisurely through Tompkins Square Park, Ronell “~ a close associate of Jacques Derrida “~ rails against our need to ascribe meaning to everything (and the fact that she’s only being given ten minutes to talk), arguing that philosophy isn’t necessarily a search for meaning. In characteristic, effusive fashion, renegade writer ~~i~~ek rummages through a garbage dump, taking aim at current pieties about the environment. “Really, we should love garbage,” he explains. Bouncing around in the back of a cab, West inveighs against certainty and dogma, espousing the importance of jazz and the blues. His ideas come at you with such force and energy that it feels like the taxi, and the frame, can barely contain him.

What emerges as these thinkers expound on both the issues of the day and seminal dilemmas within the history of philosophy is a desire to take nothing at face value, to question every assumption. One of the most intellectually stimulating films of the year, Examined Life truly feeds your head.

Astra Taylor was born in Winnipeg and received a master’s degree in liberal studies from The New School in New York City. She has served as an instructor in the sociology departments at the University of Georgia and the State University of New York at New Paltz. Her writing has appeared in numerous journals, as well as in Adbusters, Salon and The Nation. Her documentaries include The Miracle Tree (01), ~~i~~ek! (05) and Examined Life (08).