MY KID COULD PAINT THAT 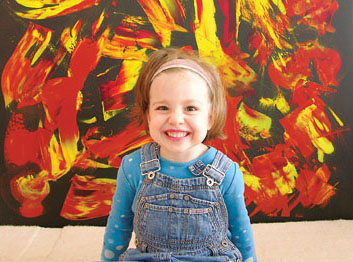 At the age of four, Marla Olmstead became an art-world sensation when in 2004 a gallery in her hometown of Binghamton, New York, devoted a solo show to her abstract paintings. Soon collectors were lauding her talent and paying up to $15,000 a canvas. Was this “pint-sized Pollock” a genuine prodigy or just a pawn of a manipulative market?

Enter documentary maker Amir Bar-Lev, whose award-winning feature debut, Fighter, screened at the Festival in 2000. Bar-Lev won the trust of Marla~s parents Mark and Laura to follow her story wherever it would go. But none of them expected the twists it would take.

My Kid Could Paint That uses a simple story to explore complex questions about art, media and family. We witness journalists going on a feeding frenzy with Marla “~ from the fluffy touch of The Today Show to the suspicious investigation of 60 Minutes. Marla~s parents are overwhelmed by the media barrage. Mark, a night manager at a Frito Lay plant, is thrilled by the attention and the chance to guide his child~s career. Laura, a dental hygienist, is more wary about journalists “who blow into your life for half a day”~ and you never hear from them again.”

As Bar-Lev forms a bond with Mark and Laura, transforming from detached observer to friend, Marla~s story takes a different turn that strains everyone involved. The film skilfully interweaves the perspectives of others drawn into the tale. Gallery owner Anthony Brunelli, a photorealist painter, has misgivings about abstract art, even though Marla is his greatest success. Local journalist Elizabeth Cohen, who was the first to write about Marla, wonders if the subsequent coverage did more harm than good. New York Times art critic Michael Kimmelman puts the Marla phenomenon in the context of an art world that trades on cynicism and irony.

As the mysteries and tensions grow, the film forces us to ask: What defines the value of a painting? The value of news? The value of friendship? These questions are bound to spur vigorous debate, just as art should.

About the director:
Amir Bar-Lev was born in Berkeley, California. He graduated from Brown University in 1994 and also studied at the Prague Film Academy. In addition to teaching at New York University~s School of Continuing and Professional Studies, he has also written and directed television projects. His feature documentary debut, Fighter (00), screened at the Festival. My Kid Could Paint That (07) is his second feature-length documentary.