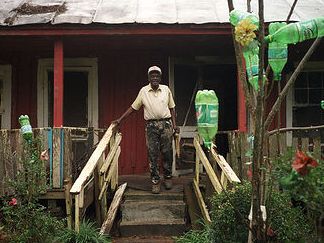 Before Nina Davenport made last year’s critically acclaimed OPERATION FILMMAKER, she directed the amusing and poignant PARALLEL LINES that chronicles her road trip across America in the months following Sept 11, 2001. At the time of its release, the film was unfairly pigeon-holed as another 9/11 movie. Now that more years have passed, it’s possible to watch PARALLEL LINES with fresh eyes and recognize it as a timeless classic.

Davenport, who epitomizes the urbane New Yorker, was working in San Diego at the time of 9/11. As a way to reflect, she chose to drive home, taking back roads across America with the goal to arrive in New York City for New Year’s Eve. Along the journey, she interviews strangers, drawing out marvelous stories that start with 9/11 but spin off in all kinds of unexpected directions.