RELIGULOUS: A CONVERSATION WITH BILL MAHER AND LARRY CHARLES 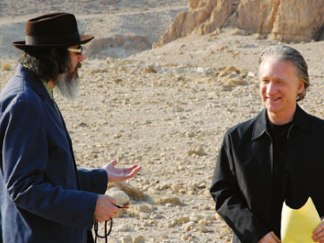 Watching politics discussed on American television, one might conclude that left-wing views can only be expressed with a sense of humour and right-wing views without. Bill Maher~s politics defy easy categorization. But he has an unstoppable sense of humour that he wields against left and right alike. He~s done so in his stand-up routines, his shows past (Politically Incorrect) and present (Real Time with Bill Maher), and his best-selling book New Rules: Polite Musings from a Timid Observer. In an age when many comics thrive by playing dumb, Maher excels at being smart.

Now he~s embarking on his first featurelength documentary, a satirical look at religion. He has teamed up with another comic master, Larry Charles, the prolific television writer, producer and director whose credits include Seinfeld and Curb Your Enthusiasm, and who attended the 2006 Festival as the director of comedy mega-hit Borat: Cultural Learnings of America for Make Benefit Glorious Nation of Kazakhstan.

In this special Mavericks presentation, Maher and Charles will take the stage to discuss religion, comedy and whatever else enters their heads “~ and they~ll share a teaser clip of Religulous, their work-in-progress. In the film, Maher travels to some of the world~s most popular religious destinations, from Jerusalem to the Vatican, questioning believers while being upfront about his own skepticism. Why is suffering so random? Why are so many religions down on homosexuality? What~s up with the virgin birth?

He talks to Hasidic scholars, Jesus impersonators, Jews for Jesus, Muslims, polygamists, Satanists, creationists, stoners, a Senator who believes in the Rapture, and even Rael “~ prophet of the Raelians “~ who it turns out is a big Bill Maher fan.

If this sounds offensive, you may crack a smile anyway. The laughs come both cheap and sophisticated. After all, the joking has a serious side when religion and politics mix. Maher at his most serious is still hilarious. If there is a hell, this will be the headline act.