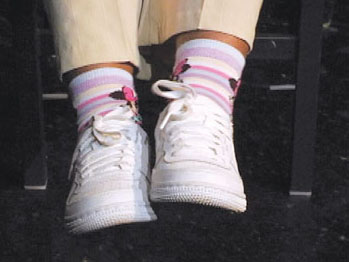 Prostitution is not only the oldest profession but also the easiest story gimmick, giving rise to tales of hookers with hearts of gold and roguish but lovable pimps. Documentaries tend toward their own stereotypes, such as the empowered sex worker or the strung-out crack whore. Rarely does a film defy expectation on this topic as much as Very Young Girls, whose title reflects the all-too-real fact that in the United States the average age of entry into prostitution is just thirteen.

The film takes us into the work of a former sexually exploited youth-turned-activist named Rachel Lloyd, who started the New York City organization GEMS (Girls Educational and Mentoring Services) to help victimized young women escape their pimps and find another way of life. We meet teenaged girls at different stages of this transition. Some have been so psychologically manipulated by their pimps that they feel compelled to return, in the same way junkies crave another fix. Others have successfully broken with their pasts. As we come to know these girls better, they emerge as well-rounded individuals full of unexpected laughter and insight.

Director David Schisgall has had an active documentary career, working as an assistant to Errol Morris before directing his first feature-length film, The Lifestyle, which explored the world of suburban swingers. (Schisgall also produced and makes a brief appearance in Operation Filmmaker, which is playing in this year~s Festival.) On Very Young Girls, he was joined by Nina Alvarez and Priya Swaminathan, who served as co-directors and shot much of the film. Their dedication shows in this carefully crafted work.

One especially chilling element the film uncovers is a videotape “~ confiscated by police “~ of two pimps recording their activities with the intent of making a reality television show. The documentation of their predatory tactics repels, but even worse is their viable notion that it might one day have become commercial entertainment.

Later we see Lloyd get recognized for her work at a human rights awards ceremony shortly after the song “It~s Hard Out Here for a Pimp” wins an Academy Award~~. The juxtaposition between reality and fiction makes one realize what a poisoned mythology we live with when it comes to the sex trade. This film is an antidote.

About the director:
David Schisgall was born in Silver Springs, Maryland, and studied philosophy at Harvard University. He worked for director Errol Morris before becoming an associate producer for ABC News. He made his feature documentary debut with The Lifestyle (99) before directing the award-winning television documentaries True Life: I Live in the Terror Zone (03) and True Life: I~m in Iraq (04).Very Young Girls (07) is his second feature.