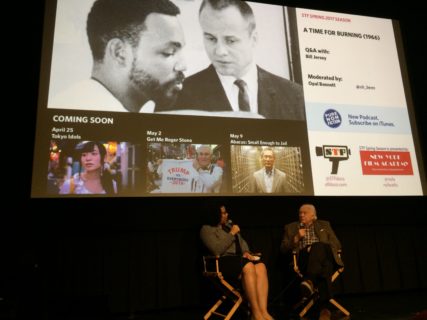 Shortly after establishing this central conflict, Jersey brings us the film’s most powerful scene.  He follows Youngdahl on a visit to a local Omaha barbershop, one that has predominately African-American clients.  It’s here he has the occasion to meet the gregarious barber, Ernie Chambers.  Immediately, Chambers and Youngdahl launch into a vociferous confrontation on both race and religion, with Chambers telling him “as far as we’re concerned, your Jesus is contaminated.”  Youngdahl is sympathetic, even though Chambers believes that “For you this may be an excursion, across the line.”  Chambers is thoughtful, forceful, and eloquent, foreshadowing his election into the Nebraska State Senate a few years later.  “I cheated,” remarked Jersey in the Q&A.  “I didn’t tell Bill he was meeting a graduate of Creighton Law School.”

It’s later in the film, when Youngdahl meets with the local council of the Lutheran Church, that we see parallels to the same veiled racism that exists today.  Many of the white pastors begin speaking about the decline in housing values when people of other ethnicities move into their neighborhoods, especially when multiple families are forced to occupy a single-family home due to economic factors.  One states, “All of a sudden we’ve got two or three families in a given house.  Nothing can lead more quickly to the deterioration of a neighborhood than multiple family residences in an area that’s supposed to be single family.”  Another follows, “Where I’m living we have quite a few Mexicans that’ve had to… it’s the same thing, the same problem that we have with the colored people.  I mean, the property deteriorates… looks bad.”  When asked about the relevance today of this theme in the Q&A, Jersey responded, “I’ve watched, as we all have, the arc of this country.  And the fact that racism never went away, never gonna go away… we’re only going to find a better way to acknowledge it, live with it, and try to mitigate its consequences.”

In this stark reality, however, the film does provide a way to move forward, by looking to the youth.  One of the young parishioners in the film, from Hope Lutheran, states “A church isn’t really a show place for saints, it’s a hospital for sinners.  And so if a person hates another person, where is he going to learn the opposite, if it’s not in church?”  Jersey believes that screenings of the film should continue for young people, because the aim of the film was to “try to understand everybody.”  He told the story of a young Nigerian woman who stood up after the film and remarked “This isn’t a film just about race… this is a film about how hard it is to change your mind, to change the way you see somebody else.”

Jersey reinforced this point by mentioning he would love the film to be shown in colleges and universities as it remains “tragically relevant” today.  Its narrative continues to be powerful and important, and in 2005, almost 40 years after it was nominated for an Academy Award, A Time For Burning was selected for preservation by the Library of Congress, as being “culturally, historically, or aesthetically significant.”  It’s clear, upon viewing the film from a beautiful 35mm print 50 years later, that all three are true. 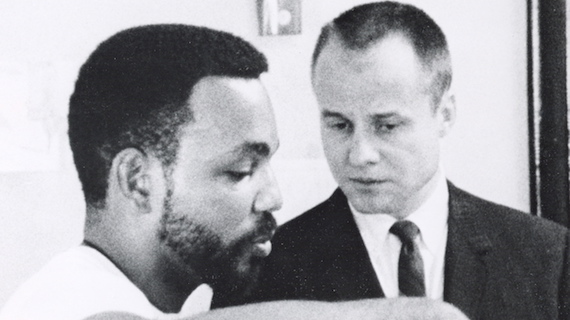