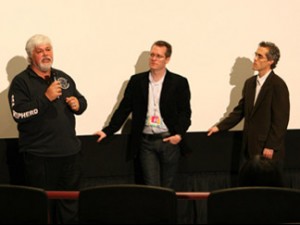 Founder/president of SEA Shepard Paul Watson, TIFF programmer Thom Powers and director Dan Stone during the “At The Edge Of The World” Q and A held at AMC 10 during the 2008 Toronto International Film Festival on September 8, 2008 in Toronto, Canada.
2008 Toronto International Film Festival – “At The Edge Of The World” – Q&A
AMC 10
Toronto, Ontario Canada
September 8, 2008
Photo by Daniel Novisedlak/WireImage.com