A City of Two Tales 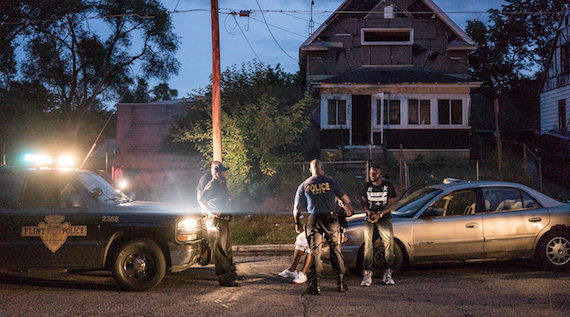 Two men are handcuffed by the local police after they were found asleep in their car in the middle of the road. The men had taken some painkillers and passed out with the car in the street. Once woken up the officers, one of the men showed his scar from a recent shooting. He repeatedly asked the officers to call a detective in the department because the man was acting as a witness in the shooting.

In the fourth week of its 2018 Winter Season, Stranger Than Fiction held a sneak premiere of the Netflix docuseries Flint Town, featuring the first two episodes of the eight-part series. What followed was more than enough to whet the audience’s appetite to binge watch the entire season the following weekend upon its release.

Directed by Zackary Canepari, Jessica Dimmock, and Drea Cooper, the eight-part series focuses on members of the police department in Flint, Michigan, a city that once stood as the absolute pinnacle of middle-class idyllic living, and now, only a few short decades later, sits as one of the most unsafe and unprofitable cities in the entire country. It experienced a fall like no other city in the United States, taking an incredible tumble when General Motors closed up its automotive plants in the mid-1980s. The residents who remain have experienced extreme poverty, a recent water crisis, and an extreme uptick in violence. As one might expect, this perfect storm of deficiencies causes tensions to run high between the community and those tasked with protecting them. One of the members of the police force, Brian Willingham, explains the challenge early in the series by saying “Show me another group of officers anywhere in America that’s having to police under those set of circumstances. I don’t think it exists.”

The directors, however, aim to show Flint not as a city meant to be abandoned, but rather one worth saving, in particular by those who serve as part of its police force. The first episode introduces us to two of those members, Bridgette Belasko and Robert Frost. In one of her first scenes, Belasko mentions that she “hasn’t seen a dead body that’s bothered me in a long time.” Frost remarks soon thereafter that the officers are just “scraping the bottom of the barrel, trying to keep up.” Even though the situation is dire, belief still exists that things can turn around. Chief James Tolbert remarks that “we have to find a new way to police, we can’t police the same way we did twenty years ago, we can’t police the same way we did five years ago.”

That imperative incites a number of the events of the first two episodes, which witness the election of a new Mayor, Karen Weaver, in November 2015. Weaver immediately embarks on several municipal reforms, one of which is to install a new Chief of Police, Tim Johnson. Johnson aims to completely restructure the department to an earlier iteration, and employ “proactive units, going out there and looking for crime.” Johnson believes the Flint Police Department has “got to be held accountable. That’s the only way the city is going to survive.” As the first episode closes, however, it remains to be seen how the members of the department will react to this severe transition in policing style.

Willingham opens the following episode by remarking, “In one of America’s most dangerous cities, the people who secure the city are less secure than they’ve ever been.” At this point the series takes us home with a number of members of the department, where they confide in the filmmakers their truest trepidations. We see Belasko’s potential promotion removed due to the change in leadership; we also see her share that frustration with Frost as we learn the two are in a serious relationship. Frost, a divisive character who, by Belasko’s assessment, “comes off as kind of asshole,” is actually deeply in love, saying “I have no idea how I am pulling this off. No idea. It’s awesome.” We also see a mother and son, Maria and Dion Reed, go through police academy training together. They share a close bond, and she explains, “He’s always been my sidekick, my little rock. He depends on me, I depend on him.” Dion isn’t as convinced, saying “I feel like I’m going to bump heads with my mom more than anybody else.”

By taking us home with these characters, the opening of the series not only gives us a complete view of the people who protect and serve Flint, but a broader picture of the city itself. In the Q&A after the two episodes, Cooper remarked “When you live in a place like Flint, where joblessness is through the roof, you’re gonna have a situation where it’s so dire, and it’s so intense, that it puts all this pressure on this relationship. So to try to understand that from the point of view of the people tasked with keeping the city safe, so to speak, I think can provide some insight.” Dimmock continued, “When you watch the community feel distrustful of the police, it’s in part because other systems that are there and are supposed to work don’t. So when you have water that’s poisoned, when your schools are shutting down, when the factories that were there abandon you – those are all systems that you should be able to rely on and you can’t. So of course that very much played into the psychology between community and police relationships and that was the thing that we felt like was important to keep there so that people could understand that.”

Both the filmmakers and Netflix sincerely hope audiences do, and that Flint Town will stand beside Making a Murder and The Keepers as yet another impressive docuseries from the streaming giant. All eight episodes are now available on the service.