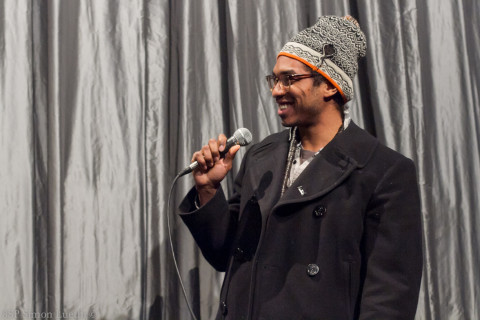 Terence Nance discusses the complex origins of AN OVERSIMPLIFICATION OF HER BEAUTY. Photo by Simon Luethi.

In 2006, filmmaker Terence Nance made a short film called How Would You Feel? Though it was billed as a fictional narrative, How Would You Feel? stars Nance and his close friend, Namik Minter, as versions of themselves. The film also dramatizes actual events and emotions experienced by Nance and Minter, as told through Nance’s perspective. Years later, Nance decided to put How Would You Feel? in context, using interviews, animations, letters, and home movies to tell a more complete, if still  personal and subjective, story. The resulting film is his feature documentary, An Oversimplification of Her Beauty. Oversimplification demonstrates the ways in which fiction can be used as a tool to convey truth and explores the challenges that arise when such truth is one-sided.

Oversimplification was the final film screened as part of STF’s Winter 2013 season. After the screening, Nance spoke with STF’s Thom Powers about the origins of his film and the success it has had over the past year.

Stranger Than Fiction: This was a film that was built in many different stages. Can you talk about that process?

Terence Nance: The first stage was How Would You Feel?, which is the movie within the movie. It was a very long short film that I made when I was in grad school at NYU. That was in 2006 and, obviously, I graduated and moved on to other things. But after that, around 2008, I decided to extend it and add all the animation and things sourced from life that hadn’t been in the script I’d written. I did that over about four years, from 2008 to the end of 2011.

Nance: I call it one-sided nonfiction. (laughter) I mean, I thought it happened that way, but any relationship has two sides, and Namik’s side is not represented. But she has her own movie. It’s not out yet, though. (laughter)

Nance: Yeah, it was definitely the hardest part. That’s why it took so long. It was originally supposed to visually represent things that transpired between us that I couldn’t film but which I thought were necessary to illustrate. I wanted, in general, for each animation to be specific in style to the concept it was illustrating, so that’s why there are so many styles.

What I did initially was contact different animators with different styles to get them to do each section, but mostly that didn’t work. I mean, I didn’t have any money, so that’s why it didn’t work. (laughter) I sort of filled in the gaps when animators flaked out on me. I did that myself and with the help of several interns. We worked out of the Museum of Contemporary African Diasporan Arts in Brooklyn, which co-produced the film. We did a lot of animation there.

Audience: How do you feel?

Nance: I feel great. I just got out of jiu-jitsu class, so I’m a little tired. (laughter) No, I mean, this has been a great year for the film. We premiered at Sundance last year, and it’s played at 42 film festivals. I never thought anyone would see it when I made it, especially when I started making How Would You Feel? So, in regards to my general life, I feel great. About the situation on screen, you know, I’m still in the friend-zone, so there’s a lifelong process of accepting that. It’s cool.

Audience: Has Namik seen this version of the film, and if so, what was her reaction?

Nance: Yeah, she’s seen it several times. Namik’s not the type to be spouting off how she feels about things, but she liked the movie. Her reaction to Oversimplification in general is pretty much the same as what she said about How Would You Feel? She didn’t really change her opinion on anything. But, you know, she was at Sundance, and she’s often at festivals that we go to. She seems to be okay with everything. And we’ve worked together on other projects. We’re friends outside of this.

STF: Is there anything odd about having this chapter of a relationship frozen in this film, when the actual events are several years in the past?

Nance: Odd? (laughter) I mean, yeah. I think in general, this film represents a space I was in and an age that has not existed for a long time, and it’s a me that I’m no longer. But because people are just seeing it now…

STF: …it’s as if they’re encountering that part of you back then.

Nance: Yeah. If you were to meet me now, I’m almost unrelated to that guy.

STF: You’ve totally got yourself together. (laughter)

Audience: What were your influences in the process and aesthetic for this film? I’ve never seen a film with this kind of cinematography and animation. I’m wondering what inspired you to make the film the way you did.

Nance: I think a lot of the film was dictated by circumstance, specifically the lack of resources. The main influence for the relationship with the audience that the film sets up is Jørgen Leth’s The Perfect Human, which I saw a few days before I started shooting, so it was really present in my mind. I was also influenced by Amelie, Wes Anderson films, Charlie Kaufman films, things like that. But I think specifically what you’re talking about are all the different ways of making images that are in the film, and I think that was because of needing to shoot with whatever camera was available that day. I just had to work with what I had. The circumstances determined the look.

STF: You’ve said a couple times that circumstances dictated the ways in which this film was made. It strikes me that you’re in the film, you directed the film, you composed music for the film, and you contributed animation to the film. Is there any one of those things that you feel is your strength, or are you comfortable wearing all those hats?

Nance: It’s easiest to perform, because I’m just playing me. That was the thing I had to think about the least. But I’m definitely weakest in the producing. The people-moving part of filmmaking is something I will never attempt to do again. I know that. But I wouldn’t say I know what I’m strongest in. I just know that it’s easiest to be in front of the camera, because it requires the least amount of preparation.

STF: Something you told me last year that was unexpected to me as part of your biography is that you were a football player in school.  You come off as such an arty type. (laughter)

Nance: You can’t be an arty football player? (laughter) Yeah, I was a football player. Not a very great one, but one indeed. But I think, you know, I loved the discipline you have to have to play football, just to exist in that space culturally, and that discipline helped when attempting to make a film. Now I have a certain game-day attitude about filmmaking. Having that attitude in a football context has helped me as a filmmaker.

STF: You’d mentioned that your football days were cut short by an injury. Would you have gone further in athletics if it hadn’t been for that?

Nance: Nah, I would’ve woken up one day and realized it was foolish. (laughter) I mean, I don’t like the way that whole thing operates in American culture, so I’m against it. I also got hit really hard in the heart, and I had a bruised heart which caused an arrhythmia, which means my heart stopped beating correctly. So I did have to stop, but I wasn’t very good anyway. I mean, I did get hit. I didn’t avoid it. But it helped me in a certain way, so I’m glad I went as far as I did. I’m just glad I didn’t go any further.

Audience: You mentioned that you contacted animators to help you convey certain emotions and experiences. Can you discuss how you scripted the film?

Nance: Good question. The night depicted in the last scene of the film prompted me to write the script for How Would You Feel? That night, I wrote pretty much the whole thing and didn’t revise it until we recorded the voice-over, many years later, and that was just a matter of revising how the narrator would say things, because I hadn’t really heard it out loud. I’d say 90% of the scripting was that one night. It just looked like pages and pages of prose. The only quirk was that it was written in the form of a song. It would say Verse, Chorus, Verse, Chorus. And the verses were like, “Let’s say this,” “Let’s say that,” and the choruses were “Given the circumstances, how would you feel?” I had never written a script before, so I referenced song writing, because that’s what I knew.

When I extended it to Oversimplification and wrote the animation, it was more in a traditional script format, because I had written some other scripts by then. I would take, for instance, the text from the letters Namik and I wrote to each other and imagine what it would look like as a normal screenplay for those sections.

Audience: One woman answers the phone in the film, and she was wonderful. Was that her own dialogue?

Nance: Too many things to name. I’m doing a documentary about skin bleaching around the world, called So Young, So Pretty, So White. It’s specifically about how the pathology of skin bleaching is different depending on the cultural context. Why the reasons people bleach in India are different from the reasons people bleach in Jamaica, for instance. I’m also doing a narrative feature called The Lobbyist, where I play a con man, and an ex-CIA agent convinces me to break into Republican politicians’ houses and blackmail them into voting for progressive legislation. (laughter) So look out for those.

STF: And this film is going to be in theaters in April.

Nance: It will be in theaters in April, yes.

STF: So look out for that.