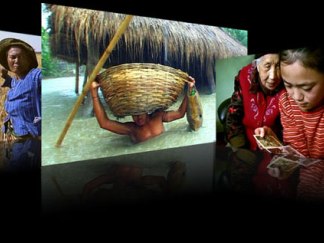 If waiting until Tuesday seems like a long time to get your next documentary fix, STF recommends the Margaret Mead Film and Video Festival. The Festival runs through November 16 at the American Museum of Natural History. This international film festival screens films on a wider range of topics. Two films, PEACE WITH SEALS and MARCH POINT deal with climate change and environmental protection. David MacDougall’s film GANDHI’S CHILDREN, follows the lives of 181 orphans at The Prayas Children’s Home for Boys. The festival includes NY premiers of films such as THROW DOWN YOUR HEART, a film about banjo great Bela Fleck and his travels throughout Tanzania, Uganda, Mail and the Gambia in search of the African roots of the banjo and Edward S. Curtis’ 1914 silent film, IN THE LAND OF THE HEAD HUNTERS. The film depicts the lives of First Nation people before their encounters with Europeans. This film will be accompanied by the Coast Orchestra, a Native American classical ensemble conducted by Timothy Long. On Sunday, I will be going to see VISIONS OF ZORA NEALE HURSTON, a presentation and panel discussion on Hurston’s own work as a filmmaker. See you there.