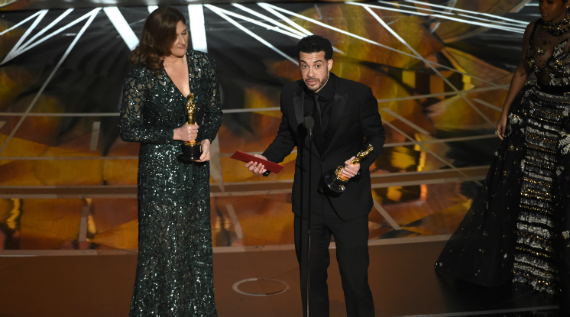 Outside of award shows, it’s been a bit of a slow news week for docs. The Toronto International Film Festival announced that this coming edition of the fest would be more acutely curated, after last year it was widely criticized for its unruly large lineup, reports Kate Erbland at IndieWire. Joshua Brunsting reported on MoMa’s Doc Fortnight for Criterion Cast, while Basil Tsiokos highlighted new offerings at ZagrebDox, Croatia’s premiere documentary fest, which began on Saturday. On the other side of the States, LA’s Film Forum is screening seven of Sergei Loznitsa’s docs in the coming days, and Justin Chang lovingly covered the event for The Los Angeles Times.

A pair of solid interviews turned up this past week in Michael Guarneri and Jin Wang‘s Film Comment conversation with Chinese documentarian Wang Bing, and Conor Bateman‘s interview with CAMERAPERSON director Kirsten Johnson at 4:3. Bateman also wrote at length on video essays in the age of social media. Meanwhile, in an exploration of lying film subjects, director Penny Lane turned up on the topic of her most recent work, NUTS!, over at IndieWire via Steve Greene. For Little White Lies, David Jenkins covered the Glasgow debut of Alethea Arnaquq-Baril’s seal hunting doc ANGRY INUK. Lastly, Nonfics published a pair of features on the racially prescient docs I AM NOT YOUR NEGRO and A TIME FOR BURNING, via Jamie Righetti and Daniel Walber, respectively.

This week you can stream Bob Hercules and Rita Coburn Whack’s MAYA ANGELOU: AND STILL I RISE over at PBS American Masters for free. Ronda Racha Penrice of The Root spoke with Maya Angelou’s son Guy Johnson and grandson Colin Johnson about the film’s release, as Variety’s Maureen Ryan praised the film, noting that it “should serve as a bracing introduction, and as an inducement to dive into her prose, poetry and speeches.”

Before signing off and heading for to Columbia, MO for this year’s True/False Film Festival, I’ll leave you with this: Martin Scorsese’s 1990 short doc about fashion designer Giorgio Armani, MADE IN MILAN – now streaming for the first time. As always, if you have any tips or recommendations for the Memo, please contact me via email here, or on Twitter, @Rectangular_Eye.