Pictures from a Revolution 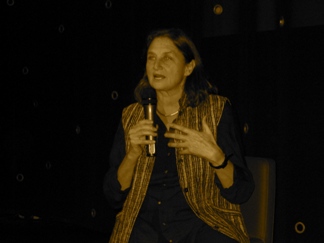 Last night the IFC Center screened PICTURES FROM A REVOLUTION by Susan Meiselas (see photo) as part of their Still to Film: Moving Images by Documentary Photographers series. The film begins with Meiselas’ gentle voice leading us down the road of the Nicaraguan countryside, her car a visiting shadow upon the landscape. She speaks slowly and deliberately and as she explains her project – to return to Nicaragua a decade after the Final Insurrection and find the men and women she had photographed ten years earlier – I got a sense that she had a deep connection to her subject matter and a need to understand her role as a documentary photographer within the war-torn country.

Her film is a narrative framed by the still photographs in her book, Nicaragua, and complicated by the contrast between the idealism of the time as captured in iconic photos, and the reality of the revolution ten years later as moving images. She explores the tension between still photos and the movement of the subjects after and outside the frame in the intervening years. In describing her experience during the late 70’s and 80’s in Nicaragua I began to think about the role of a photographer in documenting historically profound, violent events. Does Meiselas step into her own frames and become part of history by wielding her camera at the wrong time, clicking when people’s lives hang in the balance of her art? As she locates her past subjects within a moment in their present lives we see people laugh and cry upon viewing their younger selves, some deny their identity, others describe their actions in the moment of the image.

During Q&A, Meiselas said that in her photos one gets a sense that, “I’m finding a way to belong there, even if I don’t belong there.” Since the time of the Final Insurrection her photos have become symbolic of the revolution not only for outsiders but for Nicaraguans as well. Perhaps she is less of a visiting shadow and more of a presence then she knows. The IFC and ICP Center will screen ALLERS-RETOUR: A PHOTOGRAPHER’S DIARY by Patrick Zachman and INDECISIVE MOMENTS by Larry Towell on Thursday, November 13th at 7 p.m. at the IFC Center. In conjunction with these screenings, “Susan Meiselas: In History” is on exhibition at ICP Center through January 4th, 2009.