Can anyone say, “The buses are a’coming”? Stanley Nelson captures the flowering of the civil rights movement in his historical documentary FREEDOM RIDERS, about an integrated band of college students—many of whom were the first in their families to attend a university—who decide to risk everything and buy a ticket on a Greyhound bus bound for the Deep South.  It’s a beautifully told story that combines archival footage and interviews in a way that takes you right into the heart of the events that transformed America.  Audiences were captivated and sniffles could be heard through out.  At times that songs were sung in the film, you could hear murmurs from the audiences who were humming along. At the end, the filmmakers and 2 freedom riders who attended the Q and A got three standing ovations, and deservedly so.  It’s a poignant film for the times that encourages people to get out there and make a difference.

Then I made a run for a last minute addition to the line up, EXIT THROUGH THE GIFT SHOP, by the infamous graffiti artist, Banksy, who actually left his mark on Main Street in the middle of the night before the film was announced. The film takes on a lot: Banksy himself, the art of graffiti, Terry Guetta – who’s been documenting graffiti artists for almost a decade and becomes the subject of the film – and an expose on the art world with it’s mid-altering mix of hot air and hype.  I’m a big fan of Banksy so it was exciting to see a film about him work and even more so to witness the art in person that’s decorating the walls of Main Street, and causing a bit of controversy as well. 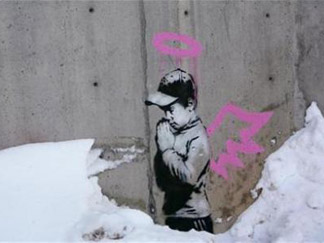 Banksy hits a local Part City wall on Main Street, stirring up controversy ahead of his documentary premiere, EXIT THROUGH THE GIFT SHOP