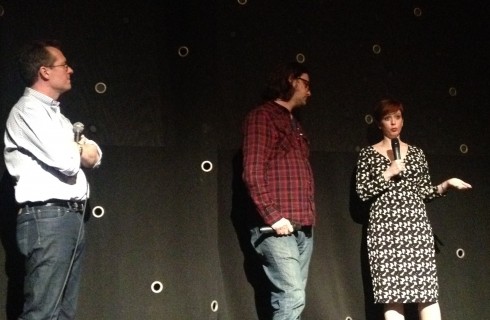 Don Argott and Sheena M. Joyce’s film “The Atomic States of America” brings home the dangers posed by the continued mishandling of our countries nuclear industry from it’s inception. With specific attention to the manipulation of regulations and communications between the federal bureau assigned to regulate it and the utilities than actually “self-regulate”, the film brings into stark focus the threats posed by what now comprises the main source of power for 1/4 of the United States.

The filmmakers travelled up from Philly to join Thom for the audience Q&A session.

Q: What brought you into the subject matter of nuclear energy?

A: (Sheena) We read the book “Welcome to Shirley: Memoir of an Atomic Town” by Kelly McMasters and kind of fell in love with Kelly’s voice and her story and we were hearing a lot about nuclear renaissance at that time and that our nation was at a nuclear crossroads at that time and the time was perfect to examine what was happening in this country and to see it through the eyes of someone living in these reactor communities and just to find out what is really at stake here.

Q: (TP) When you started working your way into it, what were the things that stood out to you or surprised you?

A: (Don) I think the most surprising thing was just like the experience we had making “Art of the Steal“, once you start to uncover an industry or an area you’re examining, it’s unbelievable the amount of influence where money trumps safety at that level of greed, you don’t want to think it would apply here. I think a lot of people, like me, never thought about nuclear — and anything I thought about it I would just assume that it was super safe and highly regulated and those are the things that you unfortunately find out one you put it under the microscope, it’s not all those things and then, what does that mean? We walked into it with an interest in the topic, but really nothing like “oh, we’re going to take down the nuclear industry”. We wanted to really understand this technology and really try to be honest about what we found.

Q:(Audience member) Have you thought about making a documentary about Dr. Helen Caldicott? She is a very fascinating woman.

A:(Don) There are several documentaries about her, we used a clip from the Academy-Award nominated “8 Minutes to Midnight” in our film, she is an amazing lady. One of the things we tried to do when making this film is we clearly reached out to the industry as well as the activists and the industry is always a lot tougher because they have a lot more to lose by talking to you. Activists and people that are on the other side of the situation are always happy to talk to you, but after interviewing many activists, we decided that this film is really about the people living in these communities and that was the story we were really interested in telling, not from the anti-nuclear side of things because I think that’s kind of been told.

Q: (TP) It strikes me as a casual observer that Fukishima made people freak out for a week or so and then we have this amnesia about it. Has this been your experience or am I being especially jaded in that interpretation?

A. (Sheena) No I feel that is accurate, Eric says it in the film, we keep talking about the half-life when we should be talking about the half-life of memory. People tend to forget quickly and I don’t think that it’s just the issue of radiation , that you can’t see it or taste it, you don’t have that same visceral reaction — I just think generally, we have forgotten about Katrina, we have forgotten about Haiti. In a relatively short time period we have forgotten about what’s happening in these other places, maybe because we are so caught up in the tough stuff in our own lives that its easier not to think about that kind of stuff.

(Don) For us, making this film it’s like anything, the more you immerse yourself in a subject, the more hyper sensitive you become to it in your everyday life. We started to notice these almost buried stories on the seventh page of the newspaper “today there was a leak at the nuclear plant and some radiation got out, but no more than an Xray and everything’s cool”. Every story seems to begin and end there, the narrative is always “nothing to see here”. The running from the invisible threat on both sides makes it so hard to understand how dangerous it is.

Q.(TP) I wonder if you have a sense of what is the media phenomenon there — you would think that a certain kind of reporter would be interested in digging into that more, do you get a sense of what the dynamic is between the PR departments of nuclear energy and the journalist community?

A. (Sheena) I think it’s hard to make nuclear accessible and emotional to people. That was certainly the challenge that we faced in this film. I think it sounds very intimidating and very complicated and it takes time to kind of explain the fundamentals before you can even start a dialog about bigger issues and I think that theres a barrier there. They also have great PR people too and that makes it tough.
(Don) There’s a reason why you see fires and murders on the front page — it’s tangible, the news is filled with things that you can see. Radiation is not something you can see so it’s really hard to point a camera at and that is a challenge, but it doesn’t mean that it’s not important and shouldn’t be addressed. 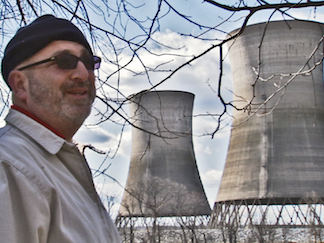