Ten days ago, the Toronto International Film Festival came to an end, but my memories will linger for a long time to come. Sifting through photos, here are 10 moments that stand out: 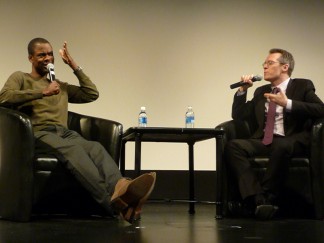 In the Mavericks conversation series, programmer Thom Powers interviewed Chris Rock for 75 minutes at the Isabel Bader Theater. The discussion started with Rock’s forthcoming doc GOOD HAIR, then ranged widely. You can read reports on AJ Schnack’s blog and Indiewire. 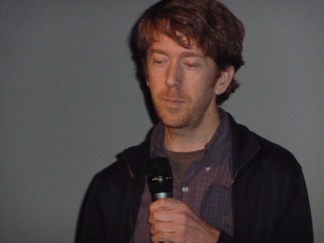 One of the most talked about docs at TIFF was COLLAPSE, the latest from Chris Smith (pictured), known for AMERICAN MOVIE and THE YES MEN. The world premiere gained an extra suspense as to whether Smith would arrive on time. The film was scheduled for 6 pm. That morning Smith went to the airport in New York only to realize that his passport was in Chicago, so the airline wouldn’t let him on the plane to Toronto. Instead he flew to Buffalo and crossed the border by car, showing immigration officials his ID and printouts from the TIFF web site about his film. Somehow it worked and he arrive at the theater just as the film began. For reviews of the film, see Variety, Entertainment Weekly, The Hot Blog, Indiewire, and All These Wonderful Things. 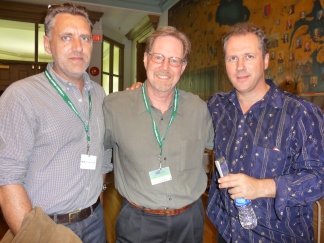 TIFF’s Doc Conference has been previously discussed on STF’s blog under “The Future of Doc Distribution.” Among the day’s panels was a fascinating discussion about the new doc ethics report from the Centers for Social Media. The talk was covered by the New York Times and has spun off further discussion on D-Word.com. Pictured here are panelists Michael Tucker (HOW TO FOLD A FLAG) on the left; and Geoffrey Smith (PRESUMED GUILTY) on the right; flanking audience member Rick Goldsmith (MOST DANGEROUS MAN IN AMERICA). 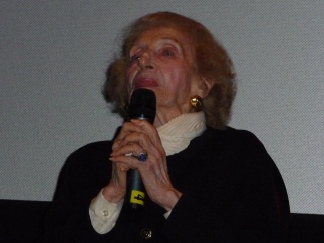 I took my mom, aunt, grandma and cousin to see the lovely documentary AHEAD OF TIME (directed by famed cinematographer Bob Richman).  The protagonist of the film is the articulate and elegant 97 year old Ruth Gruber, who came to TIFF and participated in the Q&A. Variety aptly described it as “an affecting portrait of an inspiring woman”.  I am delighted that AHEAD OF TIME will kick off STF’s fall season on Sept. 29 with both Bob and Ruth in attendance (on the eve of her 98th birthday!). 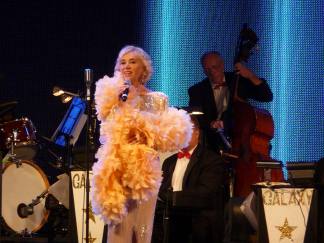 In honor of the Russian musical film HIPSTERS that was showing as part of TIFF, my mom Aelita performed with the Galaxy All-Star Orchestra at Yonge-Dundas Square (Toronto’s version of Times Square).  It was a night of swing music and glamor – with songs sung in Russian, French and English. For those of you New Yorkers who always ask when my mom is coming to town – you’re in for a treat! She’s performing with the John diMartino Jazz Quartet at the the Laurie Beechman Theater (located within The West Bank Café – 407 West 42nd St. NYC, NY 10036) on Sat. Oct. 24 at 1pm.  The show is called “Cabaret a la Russe.” 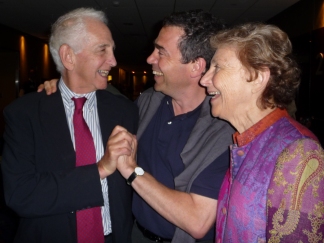 THE MOST DANGEROUS MAN IN AMERICA tells the story of Daniel Ellsberg who leaked the Pentagon Papers and set the wheels in motion that led to President Nixon’s disgrace and resignation. Ellsberg and his wife Patricia proved to be among the most compelling festival guests. As James Bradshaw wrote in the Globe and Mail, “During this year’s TIFF, I interviewed major stars, such as Penelope Cruz, Ed Norton and Jeff Bridges, but the chance to talk to a man who risked years in prison to change the culture of government whistle-blowing topped them all.” In this photo, taken on the opening night of the fest, Ellsberg and his wife greet Serge Bromberg, the director of INFERNO (playing on Oct 4 at the NYFF). 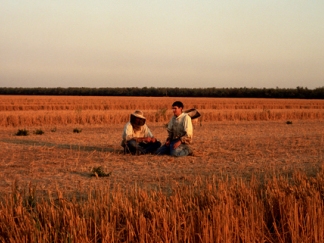 “America unraveling in different ways.” That was Thom’s summation of TIFF docs as quoted by Manohla Dargis in the lede of her New York Times article. It was gratifying to see not only doc veterans gain attention, but also newcomers like the directors of COLONY, coming to STF on Nov 3. John Anderson wrote this glowing (if ungrammatical) review in Variety: “Sleuthing after the mystery of the vanishing honeybee, COLONY may be one of the most aesthetically beautiful documentary [sic] of the season, as well as one of the more urgent and intelligent. Like that other call to action, FOOD, INC., this debut effort from helmers Carter Gunn and Ross McDonnell is about endangered agriculture, the fate of the earth and whether man can recognize his mistakes, much less fix them. As such, its target audience is species-wide. Buzz should be long, loud and insistent.” 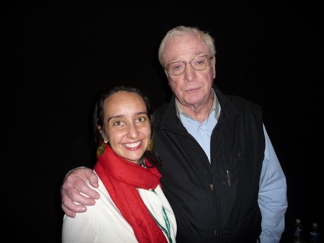 Okay, now onto a non-documentary note – it’s me and Michael Caine! He was participating in the Mavericks conversation series and promoting his new film HARRY BROWN.  Hearing Caine tell stories about his life was one of the most entertaining and riveting 75 minutes of the festival.

For more fun TIFF 09 photos, check out this album.