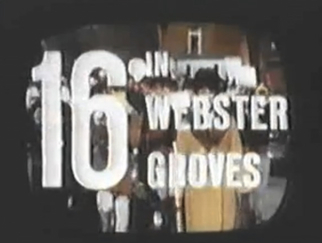 Co-presented by The Paley Center for Media

This evening will present a rare pair of films accompanied by a discussion about their significance. 16 IN WEBSTER GROVES was a 1966 award-winning one-hour TV special produced by CBS News focusing on the experiences of adolescents growing up and living in Webster Groves, Missouri, United States. The show became so controversial that CBS made a follow-up, WEBSTER GROVES REVISITED, which returned to the same characters and gave a different perspective. Viewed together, these works open bigger questions about the process of documentary making.

For a sense of the project’s legacy, watch the YouTube clip of novelist Jonathan Franzen who grew up in Webster Groves and remembers the local impact.

From Wikipedia: Produced by the late Arthur Barron and narrated by Charles Kuralt, the program was inspired by a survey conducted by the University of Chicago. It showed the middle-American, middle-class town to be a superficially friendly, prosperous, progressive, religious, charitable, arts-and-education oriented bedroom community whose adolescent culture, with the complicity (and, by inference, example and encouragement) of the adult population, was in fact clique-ridden, status-oriented, hyper-competitive, hypocritical, prejudiced, and materialistic. In stark contrast to the popular view in the mid-1960s that young people were rebelling against the values of their parents, the program depicted the Webster Groves teenagers as unimaginative and conformist. One sixteen year old girl, for example, declares that her dream is to live in a house down the street from the one she lives in now. That interview, and others with a cross section of sixteen-year-olds in the community, including minorities and exchange students, and consensual filming of their normal activities, both in school and at recreation, provided the content of the program.

A 2006 retrospective article in the local newspaper Riverfront Times indicated that, after the documentary aired, many the town’s citizens felt that their community had been unfairly portrayed. For example, when the documentary showed students running away from school in an apparent eagerness to leave, it was NOT mentioned that they were actually rushing out to see the CBS helicopter. Another time when the students were all portrayed as depressed, the real reason for that depression was not mentioned (the funeral of a popular student).


Get Tickets
Q&A with Ron Simon

16 In Webster Groves: A Verite Treatment of Middle America