A GREAT DAY IN HARLEM 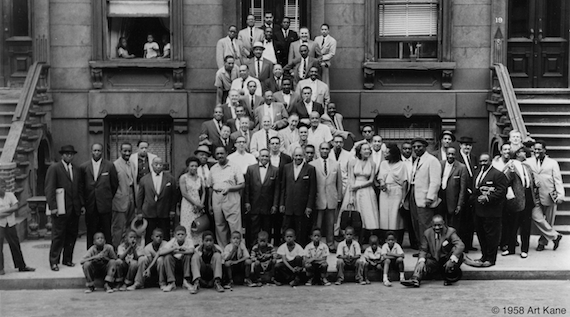 Jean Bach, the Oscar-nominated maker of A GREAT DAY IN HARLEM, passed away last May at the age of 94. Her colleagues on this film, producer Matthew Seig and Susan Peehl, will participate in a Q&A paying tribute to her memory for the first New York public screening of the film since her death.

“A GREAT DAY IN HARLEM is a wonderful documentary about a seemingly ho-hum subject — the taking of a photograph. Even when the photograph in question involves some of the greatest jazz musicians who ever lived, building a film around a static subject like a photograph is not an easy task. Jean Bach’s achievement lies in making this come brilliantly alive; indeed, there’s a surprising buoyancy and a sprightliness to the entire enterprise that makes the film unique. True, there’s a great deal of information that is imparted — delightful little tidbits such as Maxine Sullivan having a gift for remembering even the most obscure of lyrics, or that asking Thelonious Monk (who wore a light-colored jacket to make sure he stood out in the picture) a question meant one would get a remarkably frank and truthful answer — but what one remembers after viewing GREAT DAY is not the various facts presented, or even the personalities of those discussed and/or interviewed. What one remembers is the feeling of joyful immediacy that the film evokes, truly making the viewer feel as if he or she were actually there in Harlem on the day in question…” – The New York Times