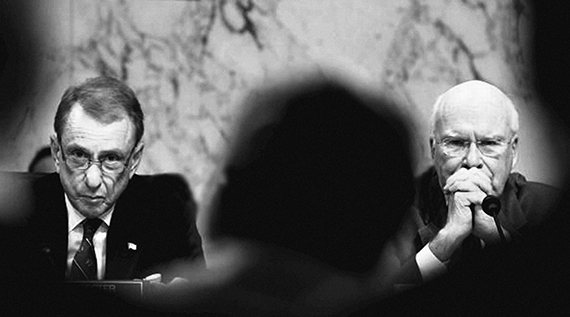 Government’s least-understood “Third Branch” has a huge impact on our lives—from abortion to affirmative action, education to the environment, privacy to police action. So we must put our faith in the ideal chiseled on its facade:

ADVISE & DISSENT is the first documentary to go behind the lines and into the trenches of the judicial confirmation wars. The film tracks two opposing lobbyists and two lions of the Senate through three contested nominations, each of which inflames passions and provokes surprising conflicts and shifting alliances.

The award-winning film weaves “you-are-there” scenes into an unexpectedly suspenseful narrative. ADVISE & DISSENT subtly but inexorably reveals how honesty has succumbed to strategy, how politics have come to trump principle, and how partisanship is overwhelming judicial independence.

Both timely and timeless, the film lays bare the collision of politics and justice that is re-shaping America’s future.