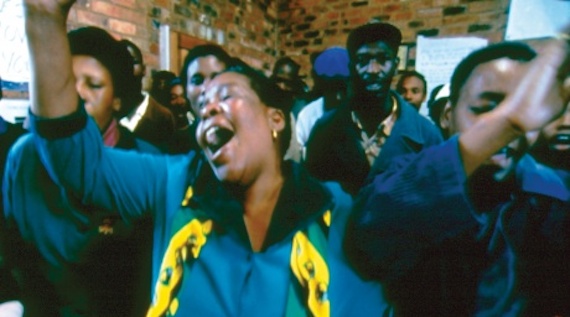 AMANDLA! A REVOLUTION IN FOUR PART HARMONY won the Sundance Audience Award and an Emmy among other accolades when it was released. Director Lee Hirsch (BULLY) spent nearly a decade capturing the power of music in the anti-apartheid struggle. Today the film has extra poignancy after the passing of Nelson Mandela in December.

Reviewing the film for the Washington Post, Desson Thomson wrote:

With admirable concision, AMANDLA! takes us through some milestones — or maybe millstones — of the struggle, as we listen to the songs that arose from them. There was the 1960 Sharpeville shooting of retreating, demonstrating blacks, of which 69 died; the imprisonment of activist Nelson Mandela; the Soweto Uprising in the mid-1970s; and the freedom and presidential investiture (and all-but coronation) of Mandela. It’s a rousing, bracing primer on the nation’s most crucial events….

While you hear the richness of the South African music, from tribal to pop-tropical, you can learn about what happened through the sometimes rascally anecdotes of Masekela, Makeba and many others. What songs, what people and what a triumph that their music won in the end.