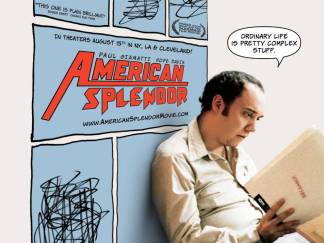 STF pays tribute to Harvey Pekar, who recently died, with this special screening of AMERICAN SPLENDOR. A New York Times’ critics’ pick when released in 2003, below are excerpts from the film review by Elvis Mitchell:

”From off the streets of Cleveland comes ‘American Splendor’ ” screams the cover of every issue of the writer Harvey Pekar’s surly and open-eyed autobiographical comic-book series. The towering, action-packed logo is a further sardonic comment on the lack of activity in the protagonist’s life.

As played by Paul Giamatti, Harvey is a gray wad of anger that spends his time in his cavelike apartment, with shelves sagging under the weight of his collection of record albums and jazz 78’s, sputtering to his equally powerless pals about a world that he refuses to understand. Slumped into a posture that’s a question mark with a pot belly, Mr. Giamatti is a frustrated tremor, shaking and gesticulating futilely.

His performance gets some of the real Pekar notes just right, including the constant peppering of sentences with ”man,” like a 50’s beat hipster. The writer-directors enliven their picture with devices that supplant the stream-of-consciousness narration that came in the comics. They surround the screen with comic-book frames and boxed text, like the ”1950: Our story begins” rectangle that hangs like a stalactite from the corner of the screen.

The comic-book visuals also provide the contrast Ms. Berman and Mr. Pulcini use to explain exactly what separates Mr. Pekar’s comics from regular super-hero stuff. The filmmakers use the real Mr. Pekar as a narrator initially. (”He’s the guy playing me,” he says in his soft croak. ”But he don’t look nothin’ like me, but whatever.”)

For a time the film cuts to the real-life Mr. Pekar, fulminating on screen with his friends against a stark white background that suggests the sheets of Bristol board that comics artists use to draw their characters. This sounds like a mocking, distancing device, and in the wrong hands it would be. But Mr. Pekar is as vivid in his way as Mr. Giamatti.