AT THE EDGE OF THE WORLD 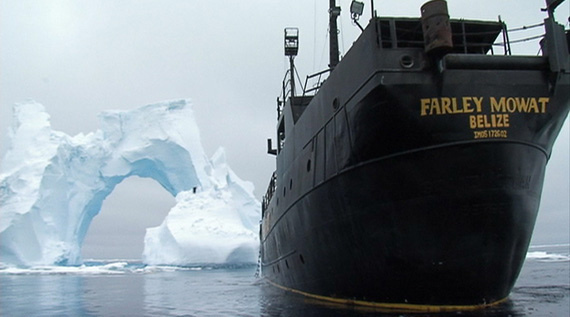 If you think pirate stories are a thing of the past, meet the members of the Sea Shepherd Conservation Society, seafarers who raise customized Jolly Rogers over their ships while conducting contemporary battles on the Antarctic Ocean. The treasures they protect are the lives of whales on the verge of extinction. Their enemies are Japanese vessels that continue to hunt whales despite an international ban. These poachers exploit a loophole that allows killing for scientific research, but the meat usually ends up in restaurant kitchens. The Sea Shepherd~s goal is to stop the slaughter, even if it requires aggressive actions.

At the Edge of the World follows one season in this high-stakes war. At the helm of Sea Shepherd is controversial Canadian activist Paul Watson, who left Greenpeace to pursue his own methods. He sets out with a crew of forty-six international volunteers who are relatively inexperienced at sea. The ships, named Robert Hunter and Farley Mowat, carry a helicopter that enables stunning overhead photography. Its combat tools include a steel “can opener” designed to rip open the hull of enemy ships while they lie in part, rope to tangle propellers and stink bombs that make whale meat inedible.

How far would you go to save an animal~s life? That is the question at the heart of Watson~s expedition. Much of the team~s time is spent searching and waiting, but when Sea Shepherd finally encounters a whaling vessel, the young activists must face challenges that are both physical and mental.

For his first feature, director Dan Stone has assembled a stellar crew. Their cameras keep hot on the tail of the action, and the suspense of watching two real boats collide is more gripping than any computer-generated version.

Whatever you think of Sea Shepherd~s outlaw tactics, At the Edge of the World will force you to grapple with the difficult question of how to protect endangered species when the law proves inadequate.