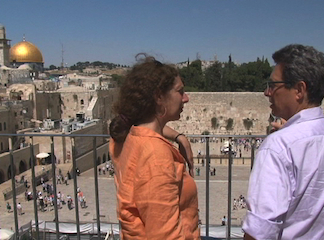 Who speaks for a divided community at the crossroads? BETWEEN TWO WORLDS is a groundbreaking personal exploration of the community and family divisions that are redefining American Jewish identity and politics. The filmmakers’ own families are battlegrounds over loyalty to Israel, interpretations of the Holocaust, intermarriage, and a secret communist past. Filmed in the United States and Israel, this first person documentary by award-winning filmmakers Alan Snitow and Deborah Kaufman begins with a near riot at a Jewish Film Festival in San Francisco, reveals the agonizing battle over divestment from Israel on a university campus, and shows the crackdown on dissent in Israel itself. BETWEEN TWO WORLDS has the exhilarating energy and fierce commitment of Jewish conversation itself.


Get Tickets
Q&A with directors Alan Snitow and Deborah Kaufman