BIGGEST CHINESE RESTAURANT IN THE WORLD 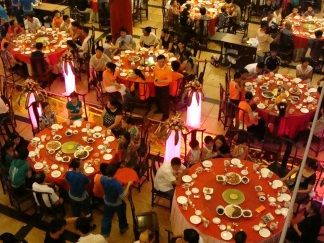 Weijun Chen, the China-based director of PLEASE VOTE FOR ME, examines his country’s expanding economy as experienced at an immense restaurant representing all levels of society.

China’s economic boom has caused transformative ripples across the world. Inside the country, the effects are even more pronounced, precipitating dramatic shifts of fortune and population. But for every person who rises to the top, thousands more serve below. The Biggest Chinese Restaurant in the World illustrates this dynamic, taking us from the front rooms to the back kitchens of the five-thousand-seater West Lake Restaurant in the city of Changsha.

Chinese director Weijun Chen has a knack for bringing a humorous touch to Chinese stories that connect with Western audiences. Last year, the Festival resented his beloved film Please Vote for Me, about a third-grade Chinese class experimenting with democracy. For both that film and this new one, Chen sent his footage to New York-based editor Jean Tsien, working in a truly international style. In addition to editing past Festival documentaries by Barbara Kopple and George Butler, Tsien’s unique credentials include having grown up amid the bustle of her family’s Chinese restaurant in the Bronx.

At the head of the West Lake Restaurant is the unstoppable Mrs. Qin Linzi, whose hard life saw her working in a quarry when she was twelve. Today she is so committed to building her empire that her personal and professional lives have merged completely: she married her chauffeur, perhaps because he was the only man with whom she spent time alone. Her customers are China’s rising middle class, who spend their newfound wealth celebrating birthdays and anniversaries while the restaurant seeks inventive ways to sell them more services. Mrs. Qin’s workers range from desperate to ambitious, all trying to get their own foothold on the bottom rung of the economic ladder.

Mrs. Qin, eager to maintain morale, delights at recruiting her staff for singing, dancing and cooking competitions; you will not soon forget the unusual race to serve a fried fish. The film is also a foodie’s delight, particularly for those whose tastes run to the exotic. West Lake’s consumption is enormous, including 150 ducks a day, and the military precision of the kitchen is something to behold. Make no mistake: this is the Guinness-certified biggest Chinese restaurant in the world. Your table is waiting.