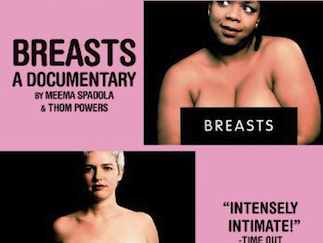 “A hilarious and equally poignant tribute to the cultural shape we’re in.” – The Hollywood Reporter

Breasts celebrates its 15th anniversary this year. This hour-long documentary, produced by STF’s own Thom Powers, consists of interviews with 22 women – ages 6 to 84 – discussing how breasts play a crucial role in the experiences of puberty, motherhood, sex, health, and aging. Interspersed throughout the documentary are segments of breast-related archival footage including a racy 1920s animated cartoon, a 1950s beauty pageant, and a 1970s bra commercial.

Spadola found her subjects by distributing “breast questionnaires” throughout New York City in doctors’ offices, youth centers, schools, strip clubs and elsewhere. Over two hundred women (and one man) responded. The interviews were filmed by an all-women crew.