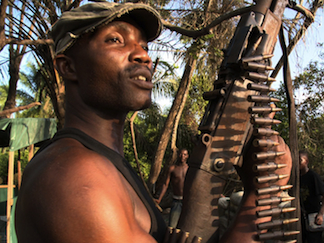 An American documentary filmmaker crosses the lines of Nigeria’s oil conflict in order to bear witness to the lives of the militants engaged in the struggle, and the civilians caught in the crossfire. With breathtaking cinematography DELTA BOYS offers a never before seen glimpse of life in the volatile oil-rich Niger Delta.

DELTA BOYS follows the lives of militant “Godfather” Ateke Tom who rules over his rebel camp with an iron fist, and Chima, a 21-year-old who left his home to join the fight. The film also shows life in a tiny fishing village where Mama, a 22-year-old, struggles to give birth amidst the conflict with no access to modern medical care. Their personal stories reflect a broad global struggle between entrenched power and corporate interest and an underserved population.

Despite the region’s massive oil wealth, the inhabitants of the Niger Delta live in poverty. Ateke’s militants have called for greater distribution of wealth and jobs. When their requests have been ignored, they’ve attacked oil-pipelines, kidnapped foreigners, and made the entire delta a no-go zone. But many feel that while the Niger Delta cause is just, the militants’ motives are not so pure.