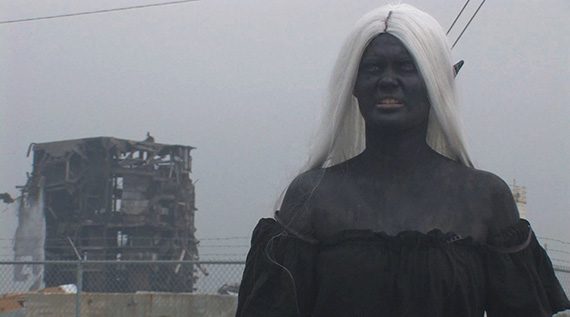 Making a documentary on pop culture has many dangers, from nostalgia and overindulgence to smugness and condescension. THE DUNGEON MASTERS is a rare example of a film that avoids all of these pitfalls and portrays characters rich in complexity. It follows three Dungeons and Dragons gamers living in unglamorous corners of lower-middle-class America. Over the course of one year, we see how their real-life aspirations are fueled by the worlds of their imaginations. Scott, whose self-deprecating humour has not translated into success as a budding novelist, struggles to support his wife and son. Elizabeth, an attractive twenty-three-year-old who dresses as a dark elf, seeks companionship after a failed marriage. Richard, who has a penchant for killing make-believe characters, aspires to reconnect with the real stepson he abandoned. Even if you find it hard to identify with the role-playing fantasy lives of these individuals, it~s easy to empathize with their human selves.

The film reunites the talents of director Keven McAlester and cinematographer Lee Daniel, who is best known for shooting many of Richard Linklater~s films. The first collaboration between McAlester and Daniel, You~re Gonna Miss Me, explored the schizophrenic world of singer Roky Erickson, and earned an Independent Spirit Award nomination. THE DUNGEON MASTERS shares that film~s discerning eye for detail. The opening scene at the annual gaming convention Gen Con establishes the milieu, as participants wander through Indianapolis dressed as magicians and swordsmen. The camera~s gaze may find the humor in the story, but it is also full of affection. The film~s mood is enhanced by a whimsical and haunting score by the band Blonde Redhead.

Seeking escape from life is a universal instinct. For some people, it takes the form of D&D; for others, film festivals. Our imaginations allow us to draw strength and courage to overcome life~s setbacks and surprises. In THE DUNGEON MASTERS, we~re reminded that all rewards come with a certain risk.

Dungeon Masters and other delights