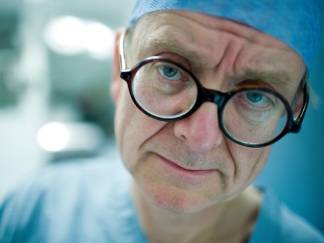 Nominated for two Cinema Eye Honors for Best International Documentary and a soundtrack by Nick Cave and Warren Ellis, THE ENGLISH SURGEON openly confronts moral and ethical issues which touch every one of us.

What is it like to have God like surgical powers, yet to struggle against your own humanity? What is it like to try and save a life, and yet to fail? This film follows brain surgeon Henry Marsh as he openly confronts the dilemmas of the doctor patient relationship on his latest mission to the Ukraine.

Henry is one of London~s foremost brain surgeons, but despite being a pioneer in his field he stills rides an old pushbike to work and worries himself sick about the damage he can inflict on his patients. “When push comes to shove we can afford to lose an arm or a leg, but I am operating on people~s thoughts and feelings…and if something goes wrong I can destroy that person~s character “~”~forever” .

Driven by the need to help others where he can, Henry has been going out to Kiev for over 15 years to help improve upon the medieval brain surgery he witnessed there during his first visit in 1992. Today the patients see him as the great savior from the West, desperate parents want him to save their child, and his Ukrainian colleague Igor Kurilets sees him as a guru and a benefactor. But for all the direct satisfaction he gets from going, Henry also sees grossly misdiagnosed patients, children who he can~t save, and a lack of equipment and trained supporting staff. “It~s like selling your soul to the devil, but what can you do? My son had a brain tumor as a baby and I was desperate for someone to help me. I simply can~t walk away from that need in others” .

It is this dilemma however, a dilemma of his own making that is what~s so interesting about Henry, what lets his troubled and compassionate humanity through, and what is the universal theme at the center of the film; the struggle to do good things in a selfish and flawed world.

“This is one extraordinary documentary, approaching hugely emotive subject matter with nimble delicacy”~a life-affirming, unforgettable portrait of a true humanitarian” Time Out

Geoffrey Smith was born in Melbourne, Australia and was always fascinated by the moving image. Never at ease in “the lucky country” however, he went travelling to find himself and discovered en route a love of listening and story telling. In 1987 he found himself in Haiti helping to make to make a documentary about the first election there in 31 years, but following the discovery of a massacre of twenty one voters in a schoolyard he was shot and wounded. Struggling to put his life back together in London, Geoffrey decided to film his journey back to Haiti to find the man who had so nearly killed him. This acclaimed film was subsequently shown on the BBC and is remarkable for the on screen catharsis it intimately portrayed. Having discovered through this very personal film that the camera could be a powerful cathartic tool in helping people through difficult periods in their lives, many of Geoffrey~s subsequent films are built around this use of the camera. Winner of numerous awards, including an RTS in 2004 and in 2007, he has made over twenty two films for all the major UK broadcasters and is drawn to observational real life dramas where deep ethical and moral dilemmas abound.