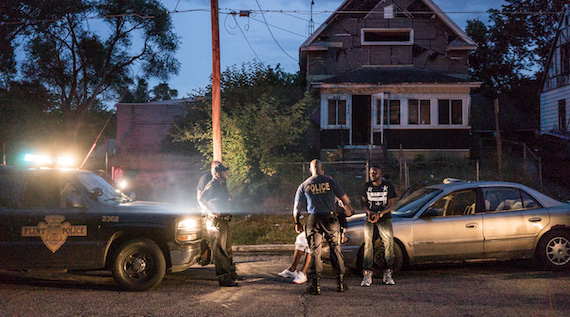 The success of episodic documentaries such as Making a Murderer and The Keepers has ushered in a new era of high quality nonfiction series that give filmmakers a bigger canvas. The latest impressive work is a three-person directing collaboration between Zackary Canepari and Drea Cooper (who profiled Flint’s Olympic boxer Claressa Shields in T-Rex) partnering with DOC NYC alum Jessica Dimmock (The Pearl). STF offers a rare chance to preview two episodes on the big screen, followed by a conversation with the filmmakers, a few days before the series launched on Netflix (on March 2).

In the aftermath of the Flint water crisis, Flint Town takes an intimate look at the state of policing in America through the lens of the Flint Police Department. The Michigan city is consistently named one of the most violent in America and the community is still grappling with the coverup of a citywide water contamination, leading to a massive distrust in law enforcement officials. Over the course of eight episodes, filmmakers embed with the police officers faced with infrastructure issues and decreasing resources as they risk their lives to protect and serve the community, while simultaneously struggling to gain their support.