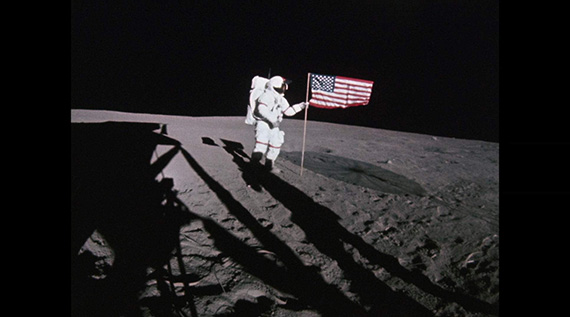 A breath-taking classic uncovering NASA footage of the Apollo missions, combined with penetrating astronaut interviews and a Brian Eno score. Nominated for the Academy Award in 1990 and an inspiration for numerous films since. Premiere Magazine wrote at the time: “[For All Mankind] lacks nothing in drama or visuals. We’re talking intercosmic colossus here, evolutionary axis mundi, infinite stupenditude unto the Over-soul, unceasing light-years of backdrop, a vast wasteland to dwarf even Dynasty-take any adjective from the Biblical epics of the late 50’s and triple it. We’re talking a time when America really knew how to blow holes in the ozone layer.”

Excerpt from an essay on FOR ALL MANKIND by director Al Reinert:

I began interviewing the Apollo astronauts in 1976. They were mostly retired astronauts by then, changed men. Over the years I taped nearly 80 hours of interviews with those original extraterrestrial humans, and excerpts from the tapes constitute the major part of the soundtrack of For All Mankind. The movie thus speaks with the intimate voice of personal experience.

Each astronaut described the same journey, in essence, but each expressed it quite differently. All had crisp memories of certain key moments that were common to all nine missions: blast-off, for instance, or the first taste of weightlessness, their first astonished glimpse of a whole Earth, their stunned first look at the Moon up close. They described these moments in different words but always with vivid intensity. These were memories shared amongst them no matter which flights they were on, common events in a very uncommon experience.

In addition to descriptions of sights and events, I also collected insights and reflections from these pioneers. Going into space is, after all, one of the ways by which mankind has expanded its self-awareness. The Moon was simply-as astronaut Jim Irwin, who landed there on Apollo 15, puts it-“our first footstep in space, where man was able to look back and see the Earth, and see himself, in a different perspective.”

What they saw is the movie itself. The astronauts went into space carrying movie cameras-16mm data acquisition cameras-which they reached for reflexively, like tourists, whenever they saw something surprising or spectacular, or merely important. They saw such things almost continually. As a result they brought back thousands of feet of amazing film, perhaps the most extraordinary footage ever shot by human beings. This film archive was exhaustively researched and carefully edited, elaborately processed, and finally blown up for the first time from the originals to 35mm masterprints. The result is both the most comprehensive and the most polished presentation ever made of this unique material.

FOR ALL MANKIND is the firsthand story of a great mythic adventure. Touching the Moon was by definition a work of inspired imagination and high art, and scarcely requires further embellishment. It speaks for itself more eloquently than it can ever be interpreted: an age-old dream that at long last was fulfilled. The movie is a testament to the power of primitive vision and the strength of human will.

[In addition to producing and directing FOR ALL MANKIND, Al Reinert is the screenwriter of APOLLO 13 and episodes four and six of the HBO miniseries FROM THE EARTH TO THE MOON.]