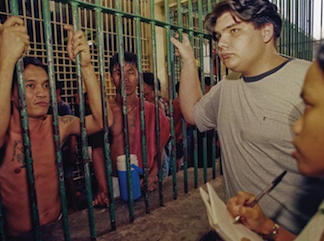 Winner of the 2011 Tribeca Audience Award

As a tropical storm beats down on the Philippine island of Cebu, two sisters leave work and never make it home. That same night, hundreds of miles away in Manila on a different island, Paco Larra&”241;aga, 19, is at a party, surrounded by dozens of reliable witnesses. The missing women, Marijoy, 21, and Jacqueline Chong, 23,are pretty and innocent Chinese-Filipinos, a group that has formed a traditional underclass. Paco, accused of their rapes and murders, is part of a prominent mestizo political clan that includes a former president. Beefy and tough, with a past of petty offenses, he neatly fits the role of privileged thug &”8211; and that is how he is cast by a frenzied media circus that swarms his arrest and trial, and cheers his eventual sentence to death by lethal injection. Reflecting schisms of race, class, and political power at the core of the Philippines’ tumultuous democracy, clashing families, institutions, and individuals face off to convict or free Paco. Their irreconcilable versions of reality and justice play out in a case that ends a country’s use of capital punishment, yet fails to free an innocent man.

GIVE UP TOMORROW is not your usual suspense story of a man wrongly accused, and Paco Larra&”241;aga is not your usual hero. But his very lack of facile appeal challenges his society and filmgoers to rely on facts over impressions, evidence over prejudice. Amnesty International, the government of Spain, Fair Trials International, and the United Nations are unequivocal in the belief that for more than a decade, Paco has been paying with his freedom for a crime he did not commit. Indeed, some 40 people including classmates and teachers from the culinary school he attends &”8211; along with photographic evidence &”8211; place him hundreds of miles from the grim crime scene. Rather than simply building an evidentiary case about an individual injustice, the film exposes the roots of this miscarriage to reveal the interconnected complexities that permeate Filipino culture. Unlike the court that Paco faces, GIVE UP TOMORROW gives a fair trial to the forces and institutions that arbitrate justice with a mix of capriciousness and malice. In a way that is both specific to the Philippines and disquietingly universal, the film exposes a Kafkaesque extravaganza populated by flamboyantly corrupt public officials, drug dealers, cops on the take, and journalists in thrall to and in lonely stance against, a frenzied legal and media circus. It is also an intimate family drama focused on the near mythic struggle of two angry and sorrowful mothers who have dedicated more than a decade to executing or saving one young man.