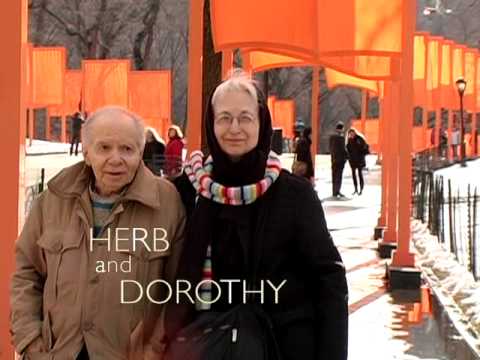 HERB & DOROTHY tells the extraordinary story of Herbert Vogel, a postal clerk, and Dorothy Vogel, a librarian, who managed to build one of the most important contemporary art collections in history with very modest means. In the early 1960s, when very little attention was being paid to Minimalist and Conceptual Art, Herb and Dorothy Vogel quietly began purchasing the works of unknown artists. Devoting all of Herb’s salary to purchase art while living on Dorothy’s paycheck alone, they continued collecting artworks guided by two rules: the piece had to be affordable, and had to be small enough to fit in their one-bedroom Manhattan apartment. Within these limitations, they proved themselves curatorial visionaries; most of those they supported and befriended went on to become world-renowned artists including Sol LeWitt, Christo and Jeanne-Claude, Richard Tuttle, Chuck Close, Robert Mangold, Sylvia Plimack Mangold, Lynda Benglis, Pat Steir, Robert Barry, Lucio Pozzi, and Lawrence Weiner.

After thirty years of meticulous collecting and buying, the Vogels managed to accumulate over 2,000 pieces, filling every corner of their tiny one bedroom apartment. “Not even a toothpick could be squeezed into the apartment,” recalls Dorothy. In 1992, the Vogels decided to move their entire collection to the National Gallery of Art in Washington, DC. The vast majority of their collection was given as a gift to the institution. Many of the works they acquired appreciated so significantly over the years that their collection today is worth millions of dollars. Still, the Vogels never sold a single piece. Today Herb and Dorothy still live in the same apartment in New York with 19 turtles, lots of fish, and one cat. They’ve refilled it with piles of new art they’ve acquired.

Megumi is currently working on the follow-up film HERB & DOROTHY 50X50, which dives deeper into the Vogel Collection itself, focusing on the Vogels’ historic gift announced in 2009, “The Dorothy and Herbert Vogel Collection: Fifty Works for Fifty States”. With this project, fifty works of art from the collection is being gifted to a museum in each of the fifty States, for a total of 2,500 works.

Sadly, Herb Vogel passed away on July 22, 2012. It had been the hope of the HERB & DOROTHY filmmaking team that both Herb and Dorothy would be able to see the new film. Though Herb is no longer with us, the team remains committed to bringing the film to fruition, carrying on the Vogels’ vision, and shining a light on the legacy Herb has left behind.