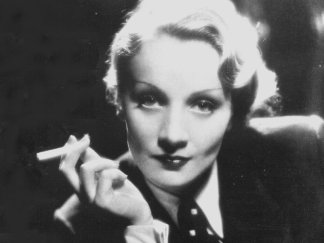 Director Maximilian Schell got the reclusive Marlene Dietrich to agree to appear in this documentary only on the stipulation that she not be photographed as she looked today. Instead, we only hear her in interviews and see her in a rich array of archival footage.

ALFRED HITCHCOCK, who never took kindly to suggestions from actors in his employ, once said of Marlene Dietrich: ”She’s a professional.”

Without wasting time on false modesty, Miss Dietrich might agree. In ”Marlene,” Maximilian Schell’s moving, unconventional documentary on Dietrich’s life, career and anxieties, it’s apparent that the remarkably durable performer is still very much in charge of things, or, at least, that she was, in September 1982 when Mr. Schell traveled to Paris to interview her for the film.

Miss Dietrich agreed to submit to audio interviews, but not to be photographed. She wants the world to remember not the virtual recluse she’s become, but the legend she has been almost from the start of her career. The film that came out of this sometimes quarrelsome collaboration is, I suspect, a far more lively, haunted likeness than any ordinary film portrait would be.

Here’s a case in which the limitations imposed on the director by his subject have forced him to adopt a form that’s as important to the film as its content. ”Marlene” is one more demonstration of the way in which the Dietrich career has been managed for more than 50 years, initially by her Pygmalion, Josef von Sternberg, and then by the actress herself.

On the screen we see dozens of clips from her concert appearances and her films, including some from early German efforts she doesn’t always acknowledge. The quintessence of the Dietrich career is revealed in shots from the von Sternberg films: ”Blue Angel” (she describes Emil Jannings as ”a ham”), ”The Scarlet Empress” (from which she analyzes one scene as if she were a film critic) and ”Morocco” – including the seductive and witty moment in which Miss Dietrich, as a cabaret entertainer, dressed in white tie and tails, ends her number by kissing – full, on the lips – a woman in the audience.

Though heard only on the soundtrack, the real-life Dietrich (who was 81 when Mr. Schell interviewed her) hovers over the film like the impatient ghost of all Dietrichs past. Though her famous, husky voice now sounds thick with age, the Dietrich mind and mettle are undiminished by time.

If she’d gone along with all of Mr. Schell’s demands, the film might have been just another show-biz valentine. ”Marlene” is something else – a portrait of a remarkably strong-willed woman, stage-managing her career right up to the bitter end. It’s also an examination of the very particular, possibly bitter legacy of movie stardom.


Get Tickets
Q&A guest to be announced