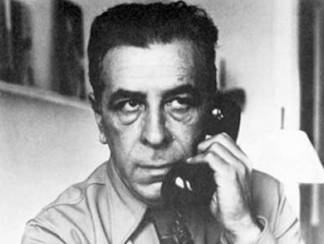 Cinematographer Tom Hurwitz has shot numerous acclaimed docs ranging from HARLAN COUNTY USA (1976) to VALENTINO: THE LAST EMPEROR (2008). Now he visits STF to pay tribute to the career of his father with this presentation of NATIVE LAND (1942), co-directed by Leo Hurwitz and Paul Strand. The film looks at labor struggles in the U.S., drawing upon the top talent of the time, including narrator Paul Robeson. Actors from the Group Theater reenact scenes that couldn’t be observed in traditional documentary style.

The film had a long and troubled production over many years. Completed just as the U.S. was entering World War II, it only had a brief release and went unseen for decades. At this special STF presentation, Tom Hurwitz will discuss the fascinating back story along with Manny Kirchheimer, a former colleague of the late Leo Hurwitz.

Here’s a selection from Bosley Crowther’s original 1942 review in the New York Times:

“Manifestly, this is one of the most powerful and disturbing documentary films ever made, and certainly it will provoke much thought and controversy. For NATIVE LAND is a graphic presentation through re-enacted scenes of incidents of brutal violations of the American Bill of Rights as revealed in actual testimony before the Senate Civil Liberties Committee in 1938. It is, to put it bluntly, a sharp indictment of certain subversive elements in this land”~elements which are never precisely identified, other than by such terms as ‘the big shots,’ ‘the interests’ and ‘powerful corporations,’ but which emerge by implication as all foes of free speech, of free assembly and the active opponents of labor organization.

And in its presentation of evidence”~evidence which cannot be denied”~this picture is a brilliant achievement in documentary cinema. Leo Hurwitz and Paul Strand, who directed it and are chiefly responsible for its production, have selected their material with care and have placed it upon the screen with such bite and dramatic intensity as would make the best directors of films take solemn note. Every sequence, every incident, is composed with an eye to rigid suspense, and the sense of violence and outrage is carried straight through the film.”