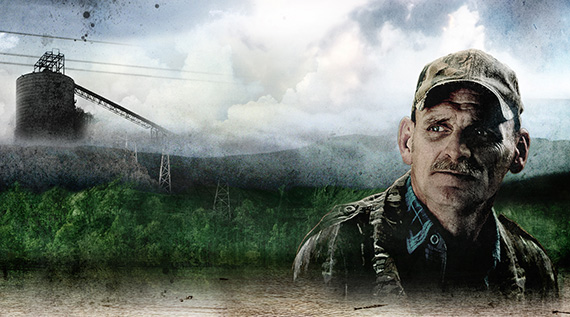 Coal River Valley, West Virginia is a community surrounded by lush mountains and a looming toxic threat. ON COAL RIVER follows a former miner and his neighbors in a David-and-Goliath struggle for the future of their valley, their children, and life as they know it.

Ed Wiley once worked at the same coal waste facility that now threatens his granddaughter’s elementary school. When his local government refuses to act, Ed embarks on a quest to have the school relocated to safer ground. With insider knowledge and a sharp sense of right and wrong, Ed confronts his local school board, the state government, and a notorious coal company — Massey Energy — for putting his granddaughter and his community at risk.

Along the way, Ed is supported by his neighbors Bo and Judy, who have their own problems with the coal company. Ex-marine Bo Webb retired to his childhood home only to discover that this once-idyllic valley is being transformed by the practice of “mountaintop removal” – blowing up mountains to extract coal. Bo’s neighbor Judy Bonds was forced to leave her ancestral home when the same company opened a mine next door – sending dangerous black water down the creek where her grandson played. Together, Bo and Judy help Ed bring attention to the dangers at Marsh Fork Elementary, hoping that if they save the school, they can save the valley.

Across the river, Maria Lambert recognizes a pattern in the unusual health problems plaguing her community. Following intuition, and what she describes as a mission from above, Maria gathers evidence suggesting that nearby coal companies have contaminated her neighborhood’s water supply.

Shot over a five-year period, ON COAL RIVER follows the transformation of these four remarkable individuals as they fight for the valley they love and for future generations — making dramatic changes against all odds.

“You’ll cheer at the tenacity of the fighters.” – Washington City Paper