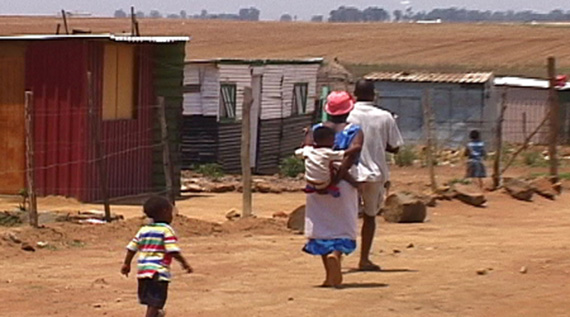 PROMISED LAND invites viewers to take an inside look at the critical story of land reform and racial reconciliation in the new South Africa. The film explores how the country is rebuilding itself after years of living under the racist, violent system of apartheid. Beginning in 1913, Blacks in South Africa were forbidden from owning land. They were forcefully removed from their land and re-settled into so called ‘homelands’ which were located in the most undesirable areas in the country. Over the course of ninety years, an estimated 6 million blacks were disposed of their land.

PROMISED LAND follows the story of the Mekgareng, an impoverished tribe removed from their land 40 years ago. In 1998, they petitioned the new democratically elected government to reclaim the land, which is now highly valuable and currently owned by white farmers and developers. And they are fighting the Mekgarang to keep possession of the land. The film also follows the story of the first white farm expropriation in the country. In 2006, the South African government ignited a firestorm when for the first time in the country’s history, it forced a white farmer to sell his farm in order to give it back to the descendants of the black owners who were removed from it in the 1940’s. Through these two stories, viewers will see why, as many inside South Africa call it, the land issue is a “ticking time bomb” that has potential to explode and destroy the fragile racial compact that post-apartheid South Africa was built upon.