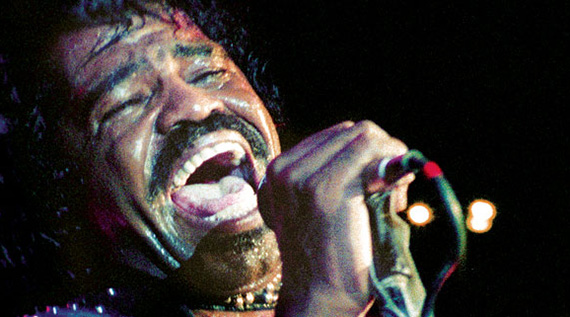 Zaire ’74 was the brainchild of South African musician Hugh Masekela and American record producer Stewart Levine, a three-day music festival that took place in Kinshasa in 1974. The event assembled America’s biggest rhythm and blues talents, including James Brown and the Mighty JBs, Bill Withers, B.B. King, and the Spinners; along with top African acts such as Miriam Makeba and Afrisa. The festival was held in conjunction with the boxing match between Muhammad Ali and George Foreman known as the “Rumble in the Jungle.” Most of the American performers, emboldened by the civil rights movement, were visiting Africa for the first time, exploring their roots and somewhat naive beliefs about the dictator Mobutu Sese Seko. The promoters hired a team of esteemed documentary cameramen to film everything, including street life in Kinshasa and behind-the-scenes footage of the show being assembled. The crew masterfully recorded classic numbers such as Makeba’s “The Click Song,” King’s “The Thrill Is Gone,” and of course, Brown’s “Soul Power.” And then the footage sat unedited for over thirty years.

The festival and film were financed by a Liberian investment group that became mired in legal disputes. Eventually, the rights were settled to facilitate the completion of the 1996 film When We Were Kings, which focused on the Ali-Foreman fight, and it won an Academy Award. Jeffrey Levy-Hinte was an editor on that project, and recognized that another film about the twelve-hour concert was waiting to be made. With Soul Power, he finally brings this work to fruition. None of the footage has ever been seen, including new sections with Ali. The film plays like a time capsule, with no contemporary interviews to interrupt its cinema verite sensibility.

Soul Power: Takin’ It Back to Zaire 74