TAKING ON THE KENNEDYS 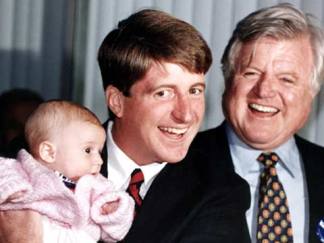 “A film that would be mistaken for a Robert Altman political satire if it weren’t absolutely and horribly true.” –USA TODAY

Originally released in 1996, the classic political documentary TAKING ON THE KENNEDYS is back just in time for Election Day.

Director Joshua Seftel’s award-winning film follows an idealistic political novice named Kevin Vigilante as he takes on 26-year-old Patrick Kennedy in a run for U.S. Congress in 1994. As Vigilante and Kennedy engage in full-scale battle — hurling mud, running negative ads (Kennedy’s ads produced by David Axelrod), and nearly coming to blows on the sidewalk — we see the inner workings of a horribly ugly race.

A funny, cringe-worthy ride, the film deftly exposes how political campaigns are won and lost.

This re-release will occur just as Congressman Patrick Kennedy, son of the late Ted Kennedy, steps down from office this year, marking the first time in 64 years that a Kennedy will not be serving in the Congress.

As the Chicago Tribune advised, “If you want to understand American politics, watch this film.”


Get Tickets
Q&A with director Joshua Seftel; co-presented by POV and Docurama"