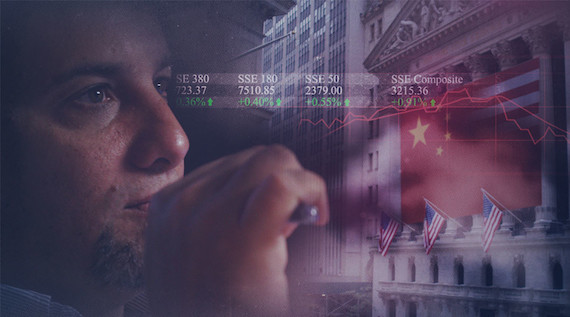 “There are no good guys in this story, including me,” says Dan David, a financial whistleblower. After the 2008 stock market crash, David — like almost everyone else in finance — was looking for ways to make big gains quickly. China became an appealing target. Hundreds of Chinese companies entered the US stock market through reverse takeovers with American companies. They boasted tremendous growth, had little oversight, and created a stock-market feeding frenzy. It seemed too good to be true and it was.

Filmmaker Jed Rothstein tells this Wall Street horror story in the tradition of Inside Job and Enron: The Smartest Guys in the Room. We meet a colourful cast of financial hustlers, obfuscators, and opportunists who presided over schemes that wiped out billions in market capitalization without anyone going to jail. Major players sit for interviews (including one who decides he’s made a big mistake talking on camera). Journalists from The New York Times, The Wall Street Journal, and Bloomberg cast further light on this shadowy world.

The film makes a frightening case that the 2008 market meltdown taught us nothing about improving safeguards or maintaining stability. Ordinary stock buyers and pension funds got screwed, but the financial managers kept their fees and profited by short selling. Now, as the Trump administration seeks to deregulate banks even more, The China Hustle sounds an urgent alarm.