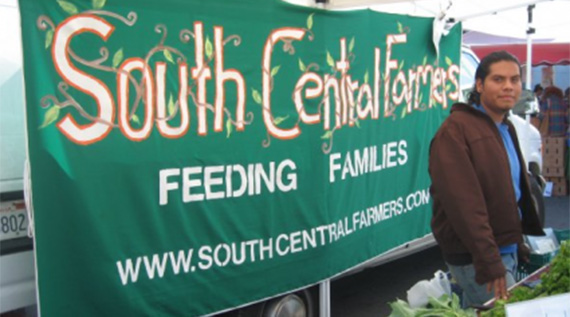 Winner of the Silverdocs jury prize, THE GARDEN follows the battle over a community garden in South Central Los Angeles, pitting its members against powerful interests in government and real estate. Director Scott Hamilton Kennedy, who won acclaim with his previous documentary OT: OUT TOWN, follows the story with remarkable dedication.

Here’s what film critic Kenneth Turan had to say about the film when it played at the Los Angeles Film Festival:

It’s tempting to call “The Garden” a story of innocence and experience, of evil corrupting paradise, but that would be doing a disservice to the fascinating complexities of a classic Los Angeles conflict and an excellent documentary that does them full justice.

Produced and directed by Scott Hamilton Kennedy, “The Garden” takes us behind the scenes into one of the most incendiary L.A. situations of recent times. That would be the fierce battle over a 14-acre community garden at 41st and Alameda streets known as the South Central Farm, a dispute that turned so bitter and protracted it is still going on. …

Producer-director Kennedy, who also had a hand in the cinematography, editing and sound, spent four years on this film, and that length of time has contributed to “The Garden’s” tone. We see that all the participants in this intricate drama are convinced they are right.

South Central Farm, sometimes called the largest community garden in the U.S., came into existence in 1992 on a parcel of city-owned land as part of a desire to do something positive for the community after the Rodney King verdict-inspired riots. Says Doris Block, one of the prime movers in the garden project, “land, people, food — it’s a pretty simple idea. Happy days.”

In fact, what we can see of the group of 372 largely Latino families who work the land indicates that they are as happy as they can be with the chance to grow crops including corn and beans, papayas and bananas. Until the eviction notice comes….