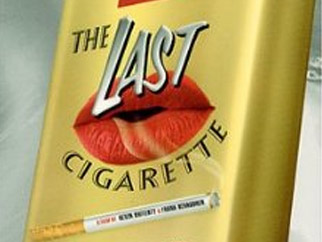 Kevin Rafferty’s documentary career has been rich and varied. He collaborated on the breakthrough doc ATOMIC CAFE (1982) that opened filmmakers to new ways of interpreting archival footage and was such a surprise hit, he was invited on The Late Show with David Letterman. His other films include BLOOD IN THE FACE (1991) about neo-Nazis and FEED (1993) which made inventive use out of satellite feeds during the 1992 Presidential election, revealing all the bits about politicians you weren’t meant to see. And if that wasn’t enough, Rafferty helped launch the career of Michael Moore as the cameraman on ROGER & ME. Rafferty’s latest work (opening today at the Film Forum) is HARVARD BEATS YALE 29-29 that premiered at the Toronto International Film Festival.

To honor this impressive career, STF is bringing back THE LAST CIGARETTE (1999) in which Rafferty and Frank Keraudren apply the treatment of ATOMIC CAFE to America’s obsession with cigarettes. The film compiles eclectic footage ranging from Hollywood to Madison Ave to bizarre fetish videos. Whether you smoke, quit or never caught the addiction, this film will deepen your understanding of why tobacco has such a powerful hold over America. Not to mention, it’s hugely entertaining and being presented on a wonderful 35 mm print, courtesy of New Yorker Films.

From Janet Maslin’s review in The New York Times: A horde of film clips illustrate the movie shorthand of a meaningful gesture and a lighted cigarette. It was an especially valuable prop in the days when films required visual metaphors for what they could not otherwise say, as in a romantic scene that ends with Jennifer Jones and a bare-chested William Holden locking eyes while touching their cigarettes together. And by angrily throwing a cigarette away, John Wayne could make himself look even tougher. There are even glimpses of latter-day smoke-porn videos in which a fully clothed woman, perhaps one with two-inch talons and a tattoo, does nothing but smoke her cigarette and talk about it. And it goes without saying that an actor who pauses before exhaling looks thoughtful, even if he’s not.