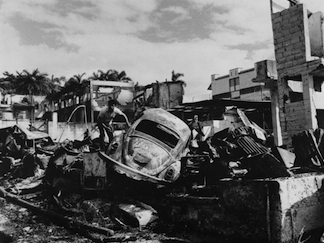 A riveting Academy Award-winning critique of the government’s history of militarization, made all the more timely by the current war on terrorism.

The Panama Deception documents the untold story of the December 1989 U.S. invasion of Panama; the events which led to it; the excessive force used; the enormity of the death and destruction; and the devastating aftermath. The Panama Deception uncovers the real reasons for this internationally condemned attack, presenting a view of the invasion which widely differs from that portrayed by the U.S. media and exposes how the U.S. government and the mainstream media suppressed information about this foreign policy disaster.

The Panama Deception: Media’s Role in Driving the War Machine