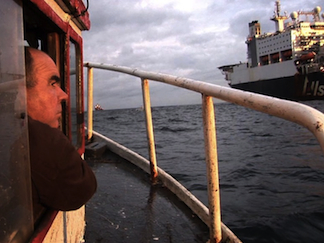 STF announces its Spring Season, including 2 more specials, for a total of 12 films. Act now to see them all at an early bird discount of $99. Offer ends Mar 28. Click “Buy Tickets” and select “8:00pm”.

We come to know several key figures in the opposition, including the wizened and profane Maura Harrington and members of the “Rossport Five,” who served time in jail. Another standout is Pat “The Chief” O’Donnell, a professional crab fisherman who is fiercely protective over the region’s waters. “There’s no job in the world that would replace it,” he says of fishing. Chugging along in his modest crab boat, he confronts the world’s largest pipe-laying vessel, the Solitaire. The match is like a dinghy challenging an aircraft carrier, and the film places us alongside O’Donnell to witness the outcome. (Text by Thom Powers for the Toronto International Film Festival).