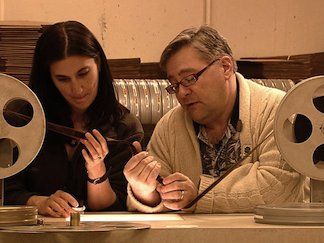 What do the films Casablanca, Blazing Saddles and West Side Story have in common? Besides being popular, they have also been deemed “culturally, historically or aesthetically significant” by the Library of Congress and listed on The National Film Registry. These Amazing Shadows, an 85-minute documentary, tells the history and importance of the Registry, a roll call of American cinema treasures that reflects the diversity of film, and indeed the American experience itself. The current list of 550 films includes selections from every genre &”8211; documentaries, home movies, Hollywood classics, avant-garde, newsreels and silent films. These Amazing Shadows reveals how “American movies tell us so much about ourselves&”8230;not just what we did, but what we thought, what we felt, what we aspired to, and the lies we told ourselves.”

From Dorothy’s entrance into Oz to the pizza delivery at Ridgemont High, cinematic moments take on iconic levels of meaning in a film lover’s life.

As the government-appointed protector of our cinematic legacy, the National Film Registry selects culturally, historically, or aesthetically significant works for preservation in the Library of Congress. From award-winning features to music videos, experimental films to home movies, each registry selection reflects a truth of its time or a standout artistic vision. Through interviews with registry board members, archivists, and notable filmmakers like John Singleton and John Waters, directors Paul Mariano and Kurt Norton demonstrate the way film documents artistic and societal milestones.

Guided by a true cinephile’s love of the medium and a treasure trove of archival footage, These Amazing Shadows molds a cultural history from pieces of film, offering a microcosm of the work of the National Film Registry and making a powerful case for film preservation.