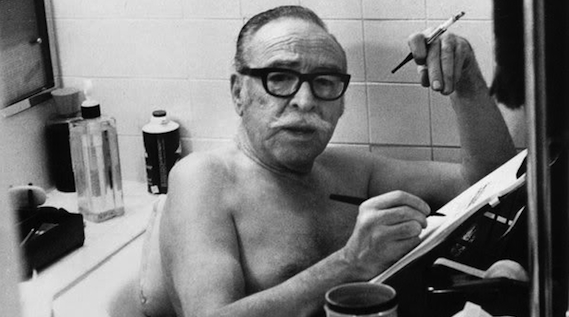 TRUMBO tells the eventful story of the best-known name in the Hollywood Ten, screenwriter Dalton Trumbo, with an unsurprising emphasis on the leftist’s misadventures with the House Un-American Activities Committee. Famous and well-paid before HUAC sentenced him and nine other fellow Communist sympathizers and members to jail, Trumbo toiled for years afterward to win back his career, returning to the movies under pseudonyms and “fronts” designed to keep a blacklisted name unconnected to the scripts he was working on (“Roman Holiday” and “The Brave One,” for which his front, Robert Rich, won the 1957 Academy Award) and then being the first to break the blacklist by taking unconcealed credit for “Spartacus” and “Exodus.”

Peter Askin’s documentary, based on a play by Trumbo’s son Christopher, focuses on what kept the writer, who died in 1976, going, through public humiliation, poverty, and self-imposed exile, along with likeminded cohorts Hugo Butler andRing Lardner, to Mexico: defiance, righteousness, and the rare ability to laugh at himself. Through interviews with biographers, family, and friends like Otto Preminger and Kirk Douglas, Trumbo emerges as an unflappably strong-willed “contrarian” who took what the reactionary paranoia of his time dealt him and more than survived. Because the doc’s origins are from a relative’s portrayal, we’re granted an intimate look at the devoted family man behind the “grumpy, cantankerous” Hollywood intellectual, one just as willing to challenge the telephone company as the United States congress and the archetypes that he “subtly shifted” in his progressive, subversive scripts.