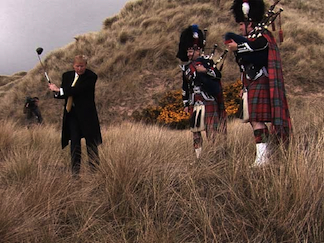 In this David and Goliath story for the 21st century, a group of proud Scottish homeowners take on a celebrity tycoon. At stake is one of Britain’s very last stretches of wilderness.

American billionaire Donald Trump has bought up hundreds of acres on the northeast coast of Scotland, best known to movie-lovers as the setting for the 1983 classic film LOCAL HERO. And like the American oil tycoon played by Burt Lancaster, he needs to buy out a few more locals to make the deal come true. In a land swimming with golf courses, Trump is going to build two more &”8211; alongside a 450-room hotel and 1,500 luxury homes. The trouble is, the land he has purchased occupies one of Europe’s most environmentally sensitive stretches of coast, described by one leading scientist as Scotland’s Amazon rain forest. And the handful of local residents don’t want it destroyed.

After the Scottish Government overturns its own environmental laws to give Trump the green light, the stage is set for an extraordinary summer of discontent, as the bulldozers spring into action. Water and power is cut off, land disputes erupt, and some residents have thousands of tonnes of earth piled up next to their homes. Complaints go ignored by the police, who instead arrest the film’s director, Anthony Baxter. Local exasperation comes to a surreal head as the now “Dr” Trump scoops up an honorary doctorate from a local university, even as his tractors turn wild, untouched dunes into fairways.

Told entirely without narration, YOU’VE BEEN TRUMPED captures the cultural chasm between the glamorous, jet-setting and media savvy Donald Trump and a deeply rooted Scottish community. What begins as an often amusing clash of world views grows increasingly bitter and disturbing. For the tycoon, the golf course is just another deal, with a possible billion dollar payoff. For the residents, it represents the destruction of a globally unique landscape that has been the backdrop for their lives.

Funny, inspiring and heartbreaking in turns, YOU’VE BEEN TRUMPED is both an entertaining, can’t-believe-it’s-true tale and an environmental parable for our celebrity driven times. A moving score features music from j&”243;nsi, the internationally acclaimed musician and frontman of Sigur Ros. The film also offers a rare and revealing glimpse of the unfiltered Donald Trump, as he considers standing as a candidate for President of the United States.