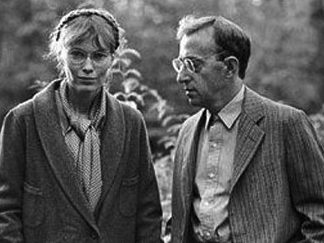 “[Allen’s] remarkably self-assured comedy is to his career what… Berlin Alexanderplatz is to Rainer Werner Fassbinder’s and… Fanny and Alexander is to Ingmar Bergman’s … Zelig is not only pricelessly funny, it’s also, on occasion, very moving. It works simultaneously as social history, as a love story, as an examination of several different kinds of film narrative, as satire and as parody . . . [It] is a nearly perfect – and perfectly original – Woody Allen comedy.” – Vincent Canby, New York Times (full article here)

Zelig is a 1983 American mockumentary film written and directed by Woody Allen, and starring Allen and Mia Farrow. Allen plays Zelig, a curiously nondescript enigma who is discovered for his remarkable ability to transform himself to resemble anyone he’s near.

The film was shot almost entirely in the style of 1920s-style black-and-white film newsreels, which are seamlessly interwoven with stock footage from the era, including cleverly filmed re-enactments of historical events. Narration is likewise largely in newsreel style. While being mostly set in the 1920s, the storyline occasionally shifts to present day (1983) interviews, shot in color.

PLUS: AARON BURR, PART 2 (8 min) a selection of the 2011 New York Film Festival. A contemporary re-imagining of the duel between Alexander Hamilton and Aaron Burr explores the idea of history as a contested narrative. Directed by Dana O’Keefe.