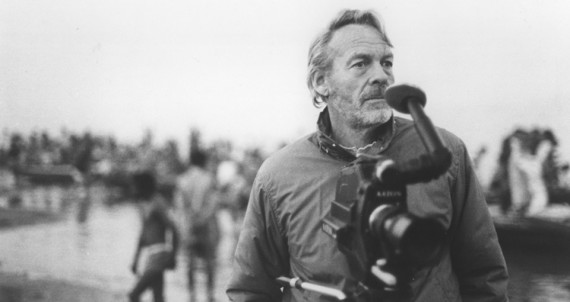 Writing for the International Documentary Association (IDA) site, Nayantara Roy wrote on the film CODE BLACK from director Ryan McGarry. Tom Roston also wrote on the film at the POV blog, while Christopher Campbell reviewed the film at Nonfics.com. Over at The Talkhouse, Amanda Rose Wilder also considered the film in relation to her own, APPROACHING THE ELEPHANT.

At the Wall Street Journal, Elizabeth Yuan wrote about the film AMERICAN REVOLUTIONARY: THE EVOLUTION OF GRACE LEE BOGGS which screens on POV tonight.

Back at Realscreen, Kevin Ritchie wrote on the recipients of follow up grants from Chicken & Egg Pictures.

The Globe and Mail’s Simon Houpt reported that CBC figures had called on the corporation to nix plans to halt some in-house documentary production. Adam Benzine of Realscreen also reported on the news.

The documentary forum the D-Word is hosting a week-long discussion on the state of the doc industry, in coordination with the IDA. You can find the forum here, but D-Word registration is required.

In a piece for the New York Post, Don Kaplan reported that advertisers were unenthused about CNN’s recent focus on documentaries.

Tom Murphy of Humanosphere wrote a piece on the film FRAMED, which examines the way that Africa is discussed in the West.

Just a reminder that the deadline for the call for entries for the 2015 season of POV is today. You can find details here.

In a piece for Transom, radio producer Jay Allison shared some tips for shooting docs visually.

At the IDA website, Katharine Relth considered THE INTERNET’S OWN BOY: THE STORY OF AARON SWARTZ.

Xin Zhou of the Brooklyn Rail spoke with Shaina Anand about her recent project FROM GULF TO GULF.

In a piece for Indiewire, Anthony Kaufman looked at STRAY DOG, and explored why WINTER’S BONE director Debra Granik.

Nicolas Rapold of The New York Times wrote on the film LIFE ITSELF about film critic Roger Ebert from director Steve James.

On the ITVS Beyond the Box blog, ITVS announced some changes to its open call process; you can find details here.

Back at Indiewire, Noam Kroll shared with fellow filmmakers his festival strategy.

At the POV blog, Amanda Brzezowski reported on the screening of WHEN I WALK from director Jason Da Silva at the Northside Film Festival. Also at POV, Tom Roston considered WHEN I WALK. And Dain Evans wrote on the screening of AMERICAN REVOLUTIONARY at The Malcolm X & Betty Shabazz Memorial and Education Center.

In a piece for Fast Co. Create, Jeff Beer reported on how unmanned aerial photography was changing the practice of filmmaking.

At the Indiewire blog Women and Hollywood, Melissa Silverstein spoke with Anne de Mare and Kirsten Kelly, the directors of the film THE HOMESTRETCH.

Back at Nonfics.com, Daniel Walber reviewed STATIONS OF THE ELEVATED, calling it one of the must-see films at the BAMcinemaFest.

Another reminder that the deadline for the  Points North Fellowship at the Camden International Film Festival (CIFF) is July 18. You can find details on the process here.

If you have tips or recommendations for the Memo, please send them via email here, or by Twitter to @GuerrillaFace. Thanks and have a great week all.