FLORENT: QUEEN OF THE MEAT MARKET 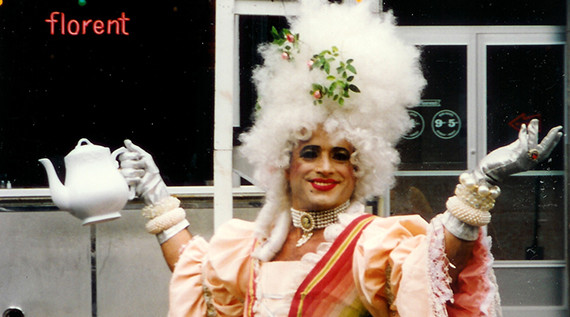 “There’s so much story there–so many people–and you really are telling the story of New York–and changing New York– through this little diner in the Meatpacking District.”

We’ve all got our place, our home away from home, our go-to spot on the map that allows us be our best and truest selves.  For 23 years, the restaurant Florent was a navigational beacon for A-list celebrities, families, and club kids alike; an LGBTQ safe haven, and a springboard for social change. For Florent Morellet, business was synonymous with activism, and he left no stone unturned in combating AIDS stigma, mobilizing the masses, and celebrating the outrageous. Told through waves of vignettes and interviews that wash over the viewer, David Sigal’s Florent: Queen of the Meat Market is an encounter with Florent the man and Florent the diner; owners of a special joie de vivre that shaped and were shaped by New York City.

All walks of life entered the diner and inhabited the walls and the daily specials board, which detailed anything but food; instead it questioned who would win in a celebrity face off, or stated a long list of who the diner was home to, including, but absolutely not limited to: political drag queens, suicidal libertines, secular surgeons, transvestal virgins, lunatic ravers, and steroidal saviors.  Waiters, managers, and celebrities tell of late nights and bizarre encounters of the diner that regular Isaac Mizrahi calls, “an oasis, a surprise.” One waiter recalls a man entering the bathroom and exiting in his underwear, covered in jelly. Another time, a transvestite hooker chased after a man who ran through the restaurant, pausing to demand, in no uncertain terms that she had bleeped his bleep, and she. wanted. her. money.

Not one to be contained, Florent, dressed in exquisite drag,  extended the party to the streets, throwing extravagant Bastille Day celebrations. Says a partygoer, “the energy atFlorent every day is like how it is on Bastille Day; everyone felt like a VIP.” The VIP feeling came from a sense of active participation, of engagement, and of education. He passed out voting forms and living wills with customer checks. An active force in the community, Florent galvanized action to address the political negligence and social stigma in the Gay Rights and AIDS movements. His 9/11 contributions were turned into a children’s book to show a positive story about community and resilience; his boat, the John J. Harvey, was used to pump water while the City’s water lines were down.

Appearing as indomitable in spirit as the city on that tragic day, when Florent was diagnosed as HIV positive, he put his T cell count on the specials board. He says in the film, “Be out, enjoy it, especially if people are giving you a hard time. Listen, I have AIDS and I’m not going to lose one T-cell because of you.” The exuberance that radiates from bothFlorent the man and Florent the diner are expressed through a prism of nuance, depth, and detail. Take, for example, the maps that paraded the walls of the restaurant.  A map addict and cartographer artist,  most of Florent’s  maps are nebulous records of place that are unencumbered by names of location; instead, shapes, routes, and patterns embody expansion and contraction; ebb and flow; life continuously in flux. Doing what maps do, his evoke a sense of place, but beyond that, they provoke ideas of wonder and investigation. As a ringmaster of the larger than life experience, in this way the 24 hour diner was a living, breathing, manifestation of a Florent map; a container that came to life in strange, exciting, and spontaneous ways.

Screened in front of a hometown Stranger Than Fiction crowd, Sigal and Florent joined the audience for a post-screening Q&A. After meeting through a mutual friend, Florent had “total trust in David,” who didn’t know the restaurant was going to close when he started filming. He was interested in the history of Florent, “ I just thought it was untapped.” They talked about their relationship and journey together as the historic diner’s location on the map became privy to skyrocketing, unattainbale rent in the growing neighborhood. Florentsaw that “the restaurant wouldn’t be there forever and it freaked him out.” Reconciling the identity of Florent the restaurant and Florent the man was addressed by Florent’s contempt for nostaligia; he threw closing dinner parties with “5 stages of grief” dinner themes. “Yeah I was kicked out. It’s good to be kicked out—kicked forward.”