In a special appearance in the IFC Center’s Stranger Than Fiction documentary series, high-altitude director Jennifer Peedom was in town for a screening of SHERPA, a film that follows Phurba Tashi Sherpa as he embarks on his world-record-setting 22nd ascent of Mount Everest.

Known in the Himalayas as Chomolungma, Sherpas, the guides to the highest mountain on earth, revere what Westerners call Mount Everest, as the mother god of earth. Rituals are performed before each summit to pray that nothing bad will happen, essentially asking the mountain permission to climb. In the film, writer Ed Douglas says of the Sherpas’ perception of Westerners, “They may not understand what compels us to climb mountains but they are fantastically good at delivering the experience.”

In an economy of yaks, potatoes, and mountaineering, summiting THE mountain is how Sherpas make their money. Expeditions can cost up to $100,000, and on average companies pay Sherpas $5,000 for a two month trek—treks that have become more and more dangerous particularly by way of the Khumbu icefall, where bus-sized ice boulders crash unannounced, and increasingly so due to warmer climates. Clients pass through the icefall twice, while Sherpas navigate the unpredictable glacier up to thirty times a season, and always at night when temperatures are colder and thus safer.

In 2014, a 14,000 ton block of ice fell, killing 13 Sherpas. The unprecedented tragedy was a galvanizing force for the Sherpas to demand improved working conditions (for instance, sturdier ice ladders) and equitable pay for the perilous nature of their grueling work. Tenzing Norgay brought Sherpas into the limelight in his climb with Sir Edmund Hilary in 1953; Hilary was knighted by the British and Norgay received a second class medal. Thus, when the Sherpas effectively cancelled the 2014 climbing season as a consequence of unmet demands from their companies and the ministry of Nepal, they were fed up with generations of second class treatment for work unable to be done without them. Furthermore, Sherpas believe in reincarnation, and spooked by the unrecoverable bodies of the avalanche, Phurba Tashi says in the film, “if we can’t do rituals for people on the mountain, then they can’t reincarnate and their spirits can’t find peace.” And yet, he goes on, “Mountaineering is where we make the most money so we keep on pretending it’s safe.”

Peedom said in the Q&A that “History was made last year in the Sherpas taking a stand, it hadn’t happened before and I think they surprised themselves, they had more power than they had realized and that is a good thing, I think the situation there is one of people moving towards self-determination, and it’s a slow process and it’s a tricky process but from the Sherpas point of view—rightly they deserve a bigger piece of the pie, and so I think no one will take them for granted anymore.”

The cinematography throughout SHERPA is arresting and formidable; interspersed time lapse sequences of the space that Mount Everest inhabits illuminates the ultimate realization of life and death. The same crystal blue skies decorated by the ebb and flow of a cloud’s life cycle are pierced with the recovery of lifeless bodies that helicopters lift from the ice rubble after the disaster strikes, capturing the fragility of life, and the intimacy and sorrow of loss. SHERPA reveals the way in which the Sherpas both surrender to and possess a dignified command of Chomolungma, believing that the mountain is not something to be conquered, but revered and respected. 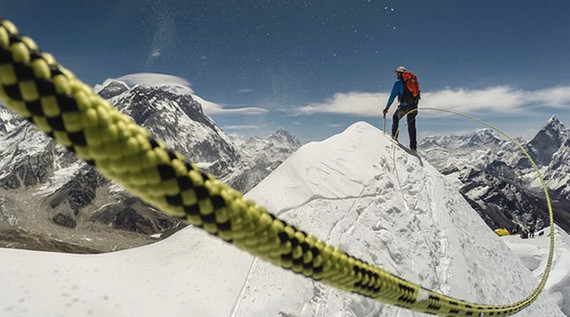